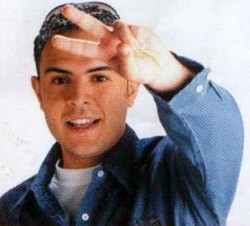 Ahmad El Sherif one of the unforgettable candidates in Star Academy 1, his smile and sweetness captured the hearts of fans from all across the country.

Ahmad Al Sharif was born on the 31st of December 1979 in Tunisia.

Fayrouz is his favorite singer. Ahmad studies Finance, he is a very ambitious person. He aims for the best in life.

On Wednesday 17-07-2005 Ahmed released his first album entitled Bein El Nass (Among People) after working on it for a longtime.

Bein El Nass (Among People) Song is a Tunisian song with lyrics by Ahmad himself and composed and Arranged by J.M. Riyshi.
It is a song with a fast rhythm that goes perfectly well with Ahmad Al Sherif Tunisian Style of singing.

During the year 2006, Ahmad El Sherif released another video clip with director Emil Sleilati, who directed his first video clip of the song Sahran Maak Ellila.

Help us improve this page:   Correct or update the Ahmad El Sherif page