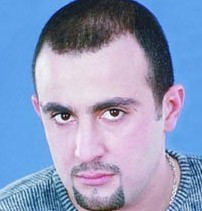 Ahmad's father is the director Salah Sakka and grandfather Abdoh Asrougi singer. Ahmad studied at the Arab Academy for the arts. He is married and has a child named Yassin ,a child named Ahmad and a child named Hamza.

His father, artist and director Mohammed Salahuddin Sakka puppet theater director, has directed many plays, including "night - and a donkey Shahabuddeen - to succeed Sahsah."

His father had a significant effect on Ahmed Sakka, The impact of an artist and a human being and his knowledge.

Some of his best action hit movies include, Tito and Africano.

Help us improve this page:   Correct or update the Ahmad Al Sakka page