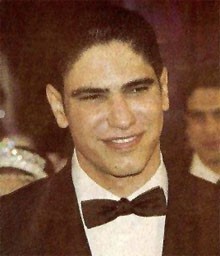 Ahmad Abu Husheima father was a police officer and his mother works with NGOs and he has a brother and a sister.

Ahmad Abou Hashima was born on 11th of January 1975. In the year 1996 Ahmad recieved his bachelor studies in commerce.

Ahmad Abou Hashima met the Lebanese singer and star Hayfa Wehbeh in a concert for Amr Diab in Dubai, since then the couple fell in love and got married on the 24th of April 2009.

Haifa Wehbe and Ahmed Abo Hashima wedding was a one of its kind event, which was talked about in the media for months!

Help us improve this page:   Correct or update the Ahmad Abou Hashima page