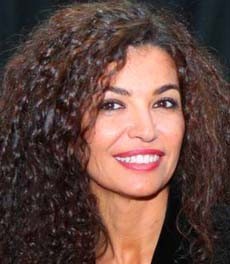 Afef Jnifen also known simply as Afef Medenine was born on the 3rd of November 1963.

Afef Jnifen is a showgirl, a model and a TV presenter from Tunisia. She is the fourth of six children. Her father, Mohamed Jnifen, was minister plenipotentiary to the bilateral relations between Tunisia and Libya.

She moved to Paris to live as a working model. Entering the fashion industry meant extensive traveling. After visiting many countries, she landed in Italy, where she is now being appreciated by famous designers.

She was finally launched by Jean-Paul Goude, the director photographer (who has also launched Grace Jones), with whom she shot several commercials, and later worked for renowned designers of Haute Couture Italian and French, like Armani, Gaultier, Chanel, Cavalli etc...

In 1990 she married the Roman Mark Squatriti lawyer and obtained Italian citizenship between 1996 and 1997. She also participated as a guest on television sets at Maurizio Costanzo Show and the following year she debuted as a host for the rotogravure Nonsolomoda Mediaset.

In 1999, she got her first experience with Fabrizio Frizzi RAI. In 2004 she made Reservoir Dogs and valley in the program since 2006 is the big night, led by Gene Gnocchi on Rai Due.

In 2005, an argument occured between her and Marcello Pera for what concerns the integration of Muslims in Italy.

In 2008 Afef Jnifen did a famous advertisement for the famous brand of L'Oreal Paris.

Help us improve this page:   Correct or update the Afef Jnifen page