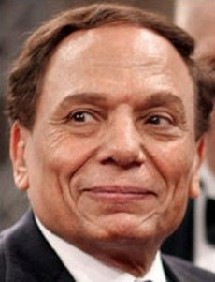 Adel Emam also known as Adil Imam is a famous Egyptian comedian actor. Adel Imam was born on the 17th of May 1940 in El Mansoura, Egypt.

Adel Emam is mainly a comedian, but he has acted in other serious roles, especially in the beginning of his career, where he mixed romance and comedy in one style.

Adel Emam holds a Bachelor Degree in Agriculture from Cairo University. Adel started as a professional actor in the year 1966.

Since that year Imam has starred in more than hundred films and ten plays. Emam got critical and international praise throughout his history.

Adel Emam is married and has three children. His children include the young director Rami Imam, Mohamad Imam who also acted with his father in the Yacoubian Building film, and Sarah Emam.

His other good movies include Amir Al Zalam in 2002, A Tagrebah El Denimarkiyah in 2003 with Nicole Saba and Aris Min Geha Amneya in 2004.

In the year 2005, Adel Emam acted in Safaara fil Imara and in the year 2006 he acted in The Yacoubian Building also known as Imarat Yackobian, a film known to be a high budget move in Egyptian history.

In the year 2007 he acted in Morgan Ahmed Morgan and in 2008 he starred in Hassan and Marcus along with international star Omar El Sharif.

In January of 2000, Adel Imam was appointed as a Goodwill Ambassador for UNHCR by the United Nations.

In February of 2012, weeks after Islamists won most of the seats in a parliamentary election in Egypt, Adel received a three-month jail sentence for insulting Islam in films and plays. The case was carried out by Asran Mansour, a lawyer with ties to Islamist groups.

Emam was accused of offending Islam and its symbols, It is well known that Adel has made fun of authorities and politicians during a career which spanned over 40 years.

Help us improve this page:   Correct or update the Adel Emam page