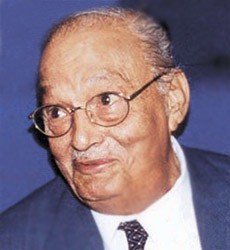 Abdel Moneim Madbouli is a famous Egyptian comedian and drama actor. Abdul Monem Madbouly was born in Cairo on the 28th of December 1921. He died on the 9th of July 2006.

Madbouli joined the theatre team while he was doing his Industrial Secondary School.

Later he joined the team of George Abiyadh after graduation then Fatma Rushdi's troup before joining the group of Sa'a Leqalbak "Amusing Hour for your Heart" in 1943 that was operated by the Egyptian Radio Station.

Madbouli was not just an actor he was a true dramatic genius.
He is considered as the founder of the first free theatrical group in Egypt in 1952.
The group introduced a number of the theatrical shows.
He took part in many plays as an actor and director of which these dramatic works achieved great success.

Some of his great works include:

Madbouli had played the hero role in many comic movies that reached more than 100 films.
He also played a great number of television serials of which is "Thanks my Dearest Sons" which he played with actors Yahia Al-Fakharany, Salah Al-Sa'dani, Farouq Al-Fishawi and Athar Al-Hakim.

Help us improve this page:   Correct or update the Abdel Moneim Madbouly page