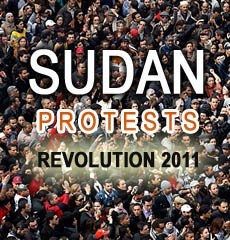 The Protests in Sudan started in the month of January 2011. Minor protests made president Bashir agree on not taking part in the upcoming elections of 2015.


Minor protests took place in the cities of Khartoum and Al Ubayid on the 30th of January 2011.

Police security forces clashed with the protesters in two universities and also in the downtown.

The protests were organized through online social sites such as facebook and twitter, starting the month of December 2010.

The two sons of opposition leader Mubarak Al Fadil got arrested on their way to the demonstrations.

The Editor in chief of the Al Watan Newspaper, Hussein Khogali, said to the media that his daughter was arrested for organizing the protest on Facebook.

On the 17th of January 2011, The Sundanese security forces arrested Hassan al-Turabi, the leader of the Congress Party, in addition to 5 other members. They got arrested for trying to organize another demonstration to protest against high inflation rates and electoral fraud.

It is worth mentioning that Sudan was facing a secessionist referendum in 2010.

The President of Sudan, Omar Al Bashir announced that he would not run for the upcoming presidential election in 2015. He made his announcement publicly on the 21st of February 2011.

Help us improve this page:   Correct or update the Sudan Protests page