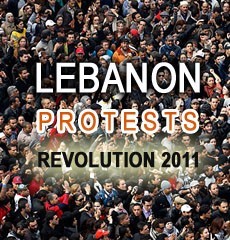 The latest 2011 Lebanese protests and pro-secular demonstrations were in a way influenced by the protests in other Arab Countries.

Lebanon's political life has a mind of its own and has a long history of protests and sit-ins. But contrary to previous manifestations that were mostly, pro-government, anti-government, 14/8, the latest protests ceased the momentum in the region and set forward a totally new agenda: To end the sectarian regime. To note that the regular protests went on as usual, in parallel.

Protagonists and Leading Participants in the Lebanon Revolution


Like most similar protests in the region, this one also was initiated by young internet activists and bloggers, like Imad Bazzi, Kinda Hassan, Nehmat Badredinne, Ali Dirani, Rawad Shami, Habib Haddad, Yalda Younes, Farah Zaher, Bassem Sheet,Catherine Daher etc. After an open meeting for the organizers at the Unesco Palace in Beirut, which included known activists like Ogarit Younan, a set of goals and demands were agreed upon for a unified vision.

A lot of debates and problems erupted within the group, affecting the spirit of the supporters. The organizers of earlier similar protests like The Lebanese Laïque Pride Group first deliberately informed their group members that they were not part of the newly organized events. Others were very reluctant about the idea of a secular regime, before making sure people were ready for such a move.

Another problem was leadership, as many of the quarrels that erupted in their meetings or facebook groups was most certainly an ego related issue, coupled with a slight difference in views. Some apparently were also not very thrilled that the better established parties, such as the Communist Party, were visible in the clan. Other frictions occurred as some traditional political baggage was brought along into the group.
Another organization called Helm Loubnan (Lebanon Dream)with activists such as Daniel Aoude, distinguished itself by providing more direct and achievable solutions; they worked on directly contacting existing politicians with their demands and asking for a straightforward feedback.

Many civil society groups also joined the rally, in an official meeting held on Thursday, 17 March 2011, to discuss the movements of citizens demanding the drop of the sectarian system in Lebanon. The long list included:

4. Lebanese Association for the promotion of transparency

9. Youth Association for the Blind


The famous slogan from the Egypt Protests was adapted to the slightly different situation and became 'Al Shaab yourid iskat el nizam el taifi' or the people want to topple the sectarian regime. Others added 'nahwa nizam 3elmani', towards a secular state.

The protests in Lebanon called for a radical reform of the political system. The long list of demands covered hundreds of diverse topics from women rights, civil marriage to saying no to the death penalty! They also want to initiate a state of citizenship, excluding from power all the existing political figures that are strongly associated to their religious backgrounds and identities.

Although many of the existing politicians had expressed their support for the movement, some activists reaffirmed they wanted all existing politicians the leave power. Nabih Beri, for example, had on numerous occasions expressed his desire to establish such a secular state, but still he was accused of trying to hijack the revolution.
The debates broke down the supporters into two opposing groups, because many believed this was the wrong strategy to adopt. They highlighted the fact that secularists are the minority in Lebanon and would not be able to impose any changes in the system except through the convergence of religious and sectarian groups into the movement, given how they worship their leaders. They also criticized how some within the movement had turned the initial mission, which was originally to address the problems of citizens in a sectarian regime into that of intentionally "cracking the heads' of sectarian leaders, or showing they were a majority not a minority, all leading to the loss of sympathizers in the targeted audience!


On 6th of March, 2011, Around 8 thousand people marched from the Dora area to the center of Beirut in the 2nd-round of a campaign (first one was on 27 February)aiming to Topple the sectarian regime and demanding secularism based changes. Similar protests occurred at the same time in the city of Baalbek and Saida.

On Friday March 18th, activists set up a tent at Riad Solh Square for a sit-in to protest the government’s inaction in adopting a civil marriage law and more generally a personal civil status law.
Two separate protests also took place, in Nabatieh’s Lebanese University Science Faculty and another one in Baalbek, with demonstrators chanting “the people want to topple the sectarian regime.”

On Sunday 20th, a large pro-secular march of more than 30,000 protesters was organized from Sassine Square Ashrafieh, all the way to Sanayeh Hamra in front of the Ministry of Interior. Some recognizable figures were spotted in the march, even if only for a short time, like Carmen Lebbos, Rabia Zayat and Ziad Sahab.


These were all peaceful protests. No Casualties or dead were officially reported in relation to the 2011 Protests in Lebanon.
Help us improve this page:   Correct or update the Lebanon Protests page