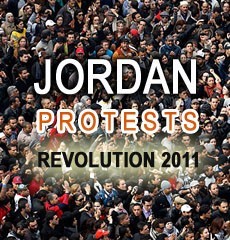 Jordan Protests started in January 2011. The protests began in the form of minor demonstrations. As a result, King Abdullah II dismissed Prime Minister Rifai and his Cabinet hoping to ease the situation and keep it under control.

The protests in Jordan were aiming at a government change only, and cannot be considered as a revolution (so far at least). The people of Jordan love their king supposedly and they were not demanding any overthrowing of power.

The Jordanians were upset with food prices inflation and the low salaries. It is safe to say that the Jordanian protests were part of the domino effect which started with the Tunisia Protests and moved to the Egypt Protests and gradually to other countries in the region.

Protesters had been pressing King Abdullah II to hand over more power to the parliament. Most of the demonstrations were peaceful and relatively small until March 25th. Demonstrations turned violent as government supporters clashed with protesters in Amman, hurling stones at each other. Several hundred government loyalists attacked more than 3,000 demonstrators who had vowed to camp out in a central square in front of the Interior Ministry until their demands were met. Hundreds of officers stormed the area after the Police had fired water cannons to disperse the crowds, hitting anti-government demonstrators with batons.

Help us improve this page:   Correct or update the Jordan Protests page