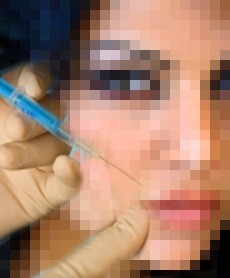 The country with the highest rate of plastic surgeries in the world is neither Brazil nor the USA, but yes you guessed it, Lebanon!

Apparently one in every 3 women in Lebanon has already gone under the knife. This number is only expected to increase, according to a French report.

With more than one million and half interventions per year, this little country is the champion of the world in plastic surgery. Seven times the rates in France!

This trend owes its origins to the history of the country. Because of the civil war and the following armed clashes with Israel, many Lebanese were left disfigured. It was a great opportunity for the surgeons working in Lebanon to master the techniques of plastic reconstruction.

On the other hand, the high numbers of men killed in wars was exacerbated by mass relocations of young men abroad for employment reasons. This lead to a heavy shortage on men; for every 5 women there is only one man. With such a high competition between women looking for potential husbands, it became natural for the Lebanese women to be obsessed with beauty and fashion.

The surgeons’ praised talents were soon incorporated into the mainstream beauty industry. Although, rhinoplasty and Botox injections in the forehead seem to be the number one plastic interventions in Lebanon, also quite popular are: mini lift of the brow, nose job or revision, fat injections in cheeks and lips, chin reduction, neck liposuction, ear back pinning operation, breast augmentation or revision, liposuction on waist and thighs, and buttocks augmentation. .

Another catalyst for such a high number of plastic interventions is the state of the economy. With 15% unemployment rate in Lebanon, beauty has become an important criterion in recruitment.

Lebanon has also become the favorite destination for Plastic Surgery Tourism. Arabs, but also Europeans often seek the professionalism and aptitudes of the Lebanese surgeons. Lebanon has been witnessing in recent years a booming Health Tourism and Feel Good Industry, closely rivaling other much more prominent destinations of the world!

And who is the pioneer of artificial plastic beauty in Lebanon you ask? The oriental pinup artist Hayfa Wehbeh. Apparently all Lebanese women want to resemble Haifa.

It's official guys! We are a visually absorbed society...so hurry up and try out the latest trends in plastic surgery today:)

Source: These Plastic Surgery Statistics as well as the information about the Heath Tourism in Lebanon are based on a French report on ‘66 minutes’ from M6 Channel, entitled... get ready for it... Beirut, Supermarket of Plastic Surgery and lifting!

If you liked this article, you should also read about the fascinating Lipstick Parrot Cichlid they sell in Beirut! You could also see Permanent Laser Hair Removal Lebanon.

Help us improve this page:   Correct or update the Plastic Surgery Statistics page