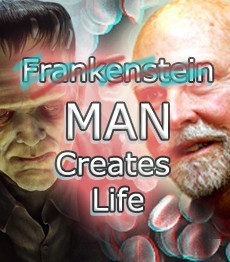 The creation of life from nonlife is slowly becoming possible. For the first time in history, scientists were able to assemble a full genetic code from laboratory chemicals and use it to create an actual living organism. Frankenstein’s tale becomes a reality, in one of the most controversial steps toward what is widely referred to as artificial life!

Scientists recently reported that they have created a cell controlled entirely by man-made genetic instructions; the latest step toward creating life from scratch.
The team making the announcement, from the J. Craig Venter Institute near Washington, said its creation has multiplied to about a billion cells. They are currently being stored in a freezer to halt their growth. This achievement is a milestone in the emerging field of "synthetic biology," which aims to control the behavior of organisms by manipulating their genes. It represents the result of 15 years worth of work by 20 scientists at a cost of about $40 million. Future use of this technology could include designing algae to capture carbon dioxide and make new hydrocarbons that could go into refineries, or speeding up vaccine production.

Some biologists are playing down this achievement though, as only the genome part was synthetic and not the recipient cell, but agree it's a major development nonetheless.

Help us improve this page:   Correct or update the Man creates Life Frankenstein is Alive page