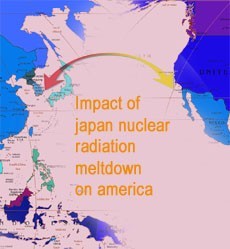 There seems to be a huge impact on America as a result of the nuclear meltdown in Japan.

On Friday the 18th of March 2011, It was found out that some traces of radioactive particles have found their way to the coast of California. It seems like the radiations from Fukushima nuclear plant have traveled across the pacific ocean within the course of 3 days.

As a result of this finding, American president Barack Obama has ordered a full review of all US nuclear power plants.

It comes as the Japanese government have raised the radioactive warning level from 4 to 5, on a scale of 7.

It is worth mentioning that the direct distance between California and Japan is approximately 8,500 km (5300 miles). And the 2 locations are facing each other with no major barriers which makes it very easy for radiations to travel.

Grocery stores and pharmacies in the country are witnessing a craze towards Potassium Iodide pills and products.

President Obama told Americans that they should not worry any further or prepare for radiation from the possible meltdown of the Fukushima nuclear power plant in Japan: "The Centers for Disease Control and Prevention and public health experts do not recommend people in the U.S. take precautionary measures beyond staying informed."

While some prefer to do nothing other than listen to their government, others have chosen to buy potassium iodide pills, after they were urged to do so by the U.S. Surgeon General.

Help us improve this page:   Correct or update the Impact of Japan Nuclear Meltdown on America page