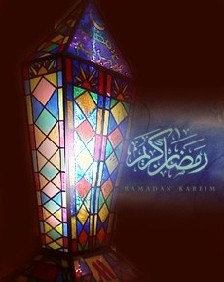 Happy Ramadan and Eid Mubarak! May this holy month be nothing but happiness and love to all of you!

Ramadan is marked by praying and fasting, intended to teach Muslims the virtues of patience, humility, and spirituality. Ramadan is also a yearly rendezvous with joyful and festive gatherings.

The celebratory mood is usually set by the decorations in the streets, which are often lit with a certain type of Lantern made of tin and colored-glass called Fanoos Ramadan. It just so happens, that’s also the name of our web-portal ;)

So we thought it was a blessed occasion to tell you more about the history of this little iconic lamp! The Fanoos , also written Fanous , Fanus and Fawanees in plural, is especially popular in Egypt. In Ramadan, no kid in the street can be spotted without one! They usually also hum a special song called Wahawi… Apparently, this custom owes its origins to the Pharos. During special festivals that lasted 5 days, the ancient Egyptians were said to celebrate their gods Osiris, Horus, Isis, Seth and Nephtys, by lighting the streets with torches. This tradition was later on adopted by the Christian Copts, and gradually became more popular all around the Middle East as a symbol for Ramadan.

The exact story linking the Fanoos to Ramadan it not quite clear though:

Some say it started with Fatimid Caliph Al Hakeem Bi-Amr Illah, who felt the streets of Cairo were too gloomy in Ramadan and ordered all the sheikhs of the mosques in his city to hang those lanterns to illuminate the way. Other tales suggest that women at the time were not allowed to leave their houses except during Ramadan. They were usually accompanied by a little boy leading the way with a small copper Fanoos. This was also a smart way to announce the arrival of women, cautioning men in the streets to move further away.

Another type of Fanoos is the popular Aladdin magic lamp model, like the one we have used for our logo. It usually contains special oil that burns using a mesh. Naturally, if you rub it real hard, a genie will come out of it and grant you three wishes…Fanoos is at your service, ask and you shall receive. Use our search engine to look for the information you need.

Help us improve this page:   Correct or update the Fanous Ramadan Lantern page