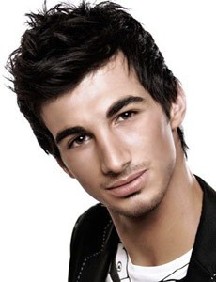 Fanoos interviewed the Lebanese-Australian pop singer RICHII to get his latest news, and more generally, to find out what sort of obstacles young artists are faced with in today's market. For more information about Richii, check his biography under Richii Abicair.

We really liked your song 'Ana Lubnaniyyoun'. Who helped you with the technical part? (music arrangement, etc..)

Actually, I wrote all the music and lyrics of 'Ana Lubnaniyyoun' and recorded it in Hadi Sharara's studio. It's always really fun going into the studio with Hadii because you never know what to expect, you know. At one point, he ran into the vocal room, told the guy to start recording and got the derbake out; it was crazy!

Why didn't you shoot a video for it?

I always believed in 'Ana Lubnaniyyoun' as a great song. It's an anthem for Lebanese people and the song speaks for itself. I love to perform that song and I knew it would be a massive hit here [in Lebanon].

Is there someone helping you with the choreography? The lyrics?

I train with Sami El Hajj. He's an amazing choreographer because he gets my style of music, He knows what looks good and he likes to change it up. In one song I'll be dancing on a chair, then the next I'm breakdancing on the floor. He's a really good choreographer.
'Dayeb Wehyatik', my first single was co-written by Munir Bou Assaf, composed by Hisham Boulos and arranged by Hadii Sharara. I wrote the English part. Since 'Dayeb Wehyatik', all the lyrics have been my own.

When will your next song be released? ( Will there be a video?)

My next song 'Eternity' comes out this month and there will be a video clip for it so stay tuned ;).

Who first encouraged you to become a singer?

I always loved music, singing and writing songs. Since I was 5 years old, I've been writing poems.

We heard you were working on a debut album. Will you produce it yourself, or will you join one of the big boys like Rotana, or Melody etc...?

I am working on a new album. There are a number of confirmed tracks, but I'm always writing because I want to make sure that every song is epically awesome. We've been looking at offers from record labels to release my album on but haven't made the decision yet. It's just a matter of choosing the right one for me.

Do you feel you are being supported by the media the way you deserve, or are you under-promoted?

I've been very lucky to have had so much support by the media, especially since I don't have an album yet. It's a testament to my fans that they've made the media want to take an interest in me and my music.

What International stars do you look up to as role models?

Michael Jackson is probably the key person I look up to. I think Usher and Justin Timberlake also have amazing talent.

What does it feel like when you perform live in front of a big crowd, like you did at Jbeil?

It's the most rewarding feeling in the world to perform on a stage in front of my fans and hear them sing along to my songs. Their energy excites me and makes me want to perform harder. In my concerts, I try to give people a show. I don't want to just stand there and not do anything.

Do you feel overwhelmed with such a large number of singers on the market? How do you impose yourself?

I impose myself as singer, who's also a songwriter and a music producer, who has a different voice and a different style to other singers.

Wouldn't you have gotten better exposure, if you had launched your singing career from Australia instead? Are you catering only for the Lebanese market, or do you have a larger international audience in mind? (Would Mika have really made it from Lebanon for example?!)

Starting out, I found my niche market in blending Western influences and stuff that I listen to and personally enjoy into Arabic music. After my song reached #1 in Arabia, I'm ready to cater now for a larger audience, like the European market, by incorporating European house and trance styles. A glimpse of this can be heard in my new single 'Eternity'. However, I want to keep writing Arabic-English songs because I don't want to disappoint my true Lebanese fans.

Help us improve this page:   Correct or update the Interview with Richard Abicair page