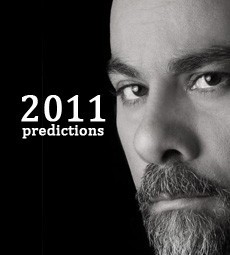 These are Mike Feghali 2011 Predictions.

Soon, the release of Lebanese prisoners from Syrian jails.

Barack Obama to visit Beirut, airport will be temporarily closed.

Qatar to become a Kingdom (not necessarily in 2011), and sees its territories increased.

Critical point to lead to a serious decision to take off masks and lift political cover.

Lebanon, for the first time, decides of its fate without foreign intervention.

Serious and responsible decision at the level of government to change all the equation.

Chairman of the Council of Ministers, location or person in this position, to be changed.

The accused and the accuser both in the same trench searching for the truth.

Tribunal indictment to be issued- follows adjustments and deals.

Lebanese Judges back to Lebanon.

The "departure" of current and former political figures.

Women figures, current or past, in decision-making position.

Elections on more than one level - early elections.

A dangerous precedent in one of Arab Republics.

A major political scandal affecting one of the major symbols in Lebanon.

No interest for the World in unveiling the truth behind the Hariri crime.

Serious revelations recognizes that Israel was involved in the assassination of Hariri, and George Hawi.

Al Koleilat at the forefront.

Gaza enters into history, despite blockade.

America and terrorism, a new rendezvous at the airports, trains and in all sectors.

Two countries take their independence or change their flag.

The Soviet Union back to its previous glory.

The end of major 'thrones' in the world.

More than once the Kingdom of Saudi Arabia under attack of terrorism, but failure of attempts.

The War of bacteria to begin in the second half of the year.

Air piracy or terrorism or hijacking of an aircraft flown in the Mediterranean.

The Arab world on a date with shock at the level of aviation.

Beirut bacillus, but regains scenes from the past.

The Arab region, after the brink of the abyss a last and longlasting peace.

A dramatic and effective speech could have been a lament.

More than one explosion and assassination attempt.

The independent Emirate on northern Lebanese borders back to the forefront up to Shekka.

The most visible politician frequently present on talk shows, to be chased.

More than a question mark on more than one personality from governmental ruling majority.

Air and maritime transport in the Mediterranean in danger.

Arab State to sweep over part of another Arab state's land.

Real Estate Boom and recovery of the state's property.

Collapse of more than one world currency, and serious talks for a unified Arab currency.

Governor of the Bank of Lebanon to face a new big challenge which he will pass,and shall receive another international award.

Lebanese army to the test, but will be the strongest.

No hard limits or palaces in the face of the Lebanese army.

Wise decision and major responsibility for the commander in charge, despite the 'baptism'.

The Army and the Resistance aligned on 'the same gun'.

Why are Rahbani's lovers crying?

The pop/music world on a date with more than a shock and many world figures in Lebanon for the funeral.

A university is the scene of a chilling scene.

More of a question mark revolves around certain television stations - a throng around OTV.

Floods affecting more than one place in the world - places disappear completely.

Lebanon to enter the Vatican twice ... Despite the difficulties, rumors, and mourning that will take over the Vatican.

Help us improve this page:   Correct or update the Mike Feghaly 2011 Predictions page