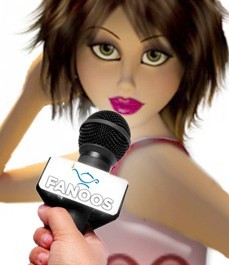 Craziest interview ever, another first for Fanoos! We have with us today the first Arab virtual humanoid celebrity singer Yaya Yay.

The thin line that separates the Virtual World from The Real World is getting even thinner by the day, that no one can be certain where one ends and the other begins. The following article is yet another example!

There have been a few other Arab virtual humanoids since Yaya first appeared on the scene, but none were as interesting or as entertaining as this virtual singer! She managed to make it into the Arabic pop-culture in a record time! She was soon followed by other virtual characters on TV that presented the weather section for example… There was also the creation of Ibn Sina, the first Arabic speaking humanoid robot, developed at the Interactive Robots and Media Lab (IRML) of the United Arab Emirates University, by a team led by Dr. Nikolaos Mavridis, a Massachusetts Institute of Technology PhD holder. The robot responds to questions, by giving answers and performing appropriate motor actions, traditional Arabic nose greeting, handshake etc... The robot is part of an innovative Interactive Theatre installation, where humans, robots, and virtual worlds co-exist…)

We first contacted Yaya through her manager Nathalie Frahat to set up this interview, but we were informed she had left for a shopping trip to London. On her return, we finally got hold of her and managed to arrange this interview! Yaya turned out to be smarter and sweeter than we thought (based on our impressions from her first video), and showed a hilarious sense of humor!
We asked her about her image, about her opinion of Haifa Wehbe and Bebe Lilly, her secret flings, her upcoming album, and many other interesting things we know you would love to read about! Enjoy…

Hello Yaya and thank you for this exclusive interview.

First question, are you satisfied with the look your creators gave you?

I do not understand the question ... ok there is a stylist that advises me on my look (and my producers too) but then I decide alone what I want to wear

Ok then…Wouldn’t you have liked to be much more realistic at least? Will there be any enhancements in the future? Could we see you one day as a hologram- 3D Projection for example?

Why do you want to see me as a hologram when you can see me for real? Do you have a problem with personal contact? :-)

Virtual Humanoids are far more popular in Asia, especially Japan. Have you ever been there?

I’ve never been to Japan, but I would love to! I love the culture and the country. Yalla, maybe it'll be my next trip! :-)

Yeah, you will certainly love it there. Do you happen to known U-Tsu-Shi-O-Mi? She is the most interactive virtual 3D character to date.

Yes, I heard about this character but I am not that much into technology….

Does it bother you when we refer to you as a virtual humanoid? Is there another term you would prefer we used?

Strange question again. You guys from Fanoos ask me strange questions. I don't know why you are saying that. Is there something wrong with the way I look?

Oh, no please, there is nothing wrong with the way you look… Honestly, who is hotter you or Haifa Wehbe? Who sings better?

I love Haifa Wehbe and Nancy Ajram too! It is not for me to say who the best singer is, ask the public. But, anyway, there is no reason to choose. The music scene is big enough for everyone. Don't you think?

Yes, sure. So far you have only done one song (Yay), which was also shot as a music video. Why haven’t you released anything else since? Are you planning a come-back anytime soon, or is this an early retirement?

Thanks to the public, my first single “Yay” was a big hit so, at first, I had to perform in different places and after I had some personal issues that kept me a bit away from my career... but my album is on the way. We're working on it and I can assure you that it'll be a great hit too! I llllooove Music! :-)

Wow, great news! We are looking forward to it then. Some were saying that Bebe Lilly might have driven you out of business…What do you think of her songs?

Anyway, you are very comfortable in front of the camera, have you ever considered acting…maybe have your own mini-series? The adventures of Yaya maybe;) What about becoming a weather girl?

Weather girl?? why? oh no ! hihihi!
But having my own show and acting in my own series is already part of my career plan, so wait and see!

It seems you have been busier than we thought! We also heard rumors that you were dating Sam Worthington from Avatar, is that true? What’s your type of men?

hahaha no, this is not true :-) but even if it was true, I wouldn’t say it to you. I don’t like to talk about my personal life.

Ok, we respect that. You had an endorsement deal with a juice brand a while back, and you made a few radio and TV advertisements for them. Tell us a bit how they contacted you, why they chose you etc… Were all protagonists satisfied with the results?

Yes, I made an advertisement for a juice. They contacted my producers and we agreed to do it. It was fun and of course, yes, everyone was satisfied.

Alright then. What sort of music do you listen to? Which singers currently on the scene do you like? Do you not like? (International and Arabs)

I like almost all kinds of music. What I like to hear depends on how I feel at the moment. But I have a crush on oriental music and i looove Wael khoury’s voice ! ;-)

mmm then we think we might have guessed what sort of men you are into, after all lol. Tell our readers something they don’t already know about you. Give us a scoop!

That should be your next commercial then! Thank you Yaya for this delightful interview. Hope we didn’t offend you with any of our questions.

Thank you for your interest & kindness. I just want to thank all my fans who support me and tell them : I love you all ! mwah !!