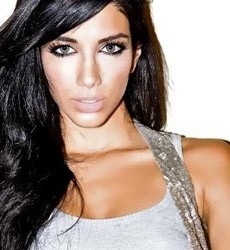 Jessica Kahawaty is an Australian Beauty Queen from Lebanese descent. This beautiful woman was practically still a girl when she started off and became the ‘image de marque’ of famous international brands such as Maybelline Cosmetics.

You might have gotten a glimpse of her during the Miss Lebanon 2010 Pageant (We still think the judges made a huge mistake and need a good spanking!), or more recently on Lebanese and Arab Magazine covers that could no longer ignore her intriguing beauty (and this is expected to only go in crescendo)...However, her modeling career was already booming and her face popping up a bit everywhere on the international scene long before that!

We were very pleased when Jessica accepted to give us this little interview, which we will now be sharing with you guys.

Hello Jessica, and thank you for giving us this interview.

You're welcome. Thank you for including me on your Top 100 Sexy Arab Women 2010 list!

Can you tell us a bit how you ended up in this field of beauty pageants and modeling? Were you discovered by a talent scout, or was this something you planned out from the start?

My modelling career began when I was 14 and I began competing in pageants at the age of 17. At 14, I was discovered by a talent scout. I never thought of doing modelling. I also never thought I would enter a pageant but my friends and family motivated me to enter my first one, Miss Lebanon Australia 2007 which I won.

Well with such beauty, it would have been a crime not to! What are your upcoming projects; are there still other beauty pageants you would like to take part in, or have you chosen modeling as a career?

I have many upcoming TV and film projects in the Middle East and the US. I am also working on some major campaigns in Australia. I have been blessed with amazing and unforgettable experiences in the pageant industry - from travelling to meeting great individuals. I competed in over 5 pageants for my beautiful country Lebanon that I did very well in, however, my final pageant as I always say was Miss Lebanon 2010.

Anyway we feel very happy wherever and whenever we see you. Do you have other talents you would like to explore? Is there a chance we might see you one day as an actress in a big movie for example? Or are your future plans more into opening a personal business etc…?

Talents? I can juggle! I have been training as an actor and let's just say a movie is on the map for 2011. Perhaps in the Middle East... perhaps in the US! My father is in the jewellery/diamond industry so I would love to go into that field sometime in the future.

It's good to keep all your options open :) Anything else you would like to add before we end our little chat?

Would like to thank all my family, friends and fans who voted. Keep an eye out for my future plans as they will only be bigger and better. Much love!

Sure we will, you can bet on it. Thank you again for doing this and good luck with all your future projects.
Help us improve this page:   Correct or update the Australian Beauty Queen page