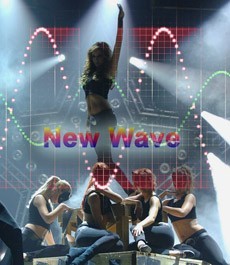 Instant flash back! Here is a quick recap that retraces the evolution of the Arabic Music Scene during the last 2 decades, leading to the birth of Arabic New Wave Music.


The Arabic music scene has been witnessing in the last couple of years a drastic facelift, putting it back up there on the international map where it is supposed to be.

The trend originated with Amr Diab who got the younger generations interested again in local Arab singers, by infusing modern dance beats into his slower oriental melodies. For a while, the scene witnessed a wave of Latin-Arabic or Gypsy inspired sounds with names like Dania El Khatib.

This was followed by a phase marked by recycled Turkish tunes and Greek inspired Arabic tracks. Pascale Machaalani was one such artist.

But gradually, the trend moved on to Arabic pop-dance. Soon after, other artists joined the “fun” like Elissa, Melissa, and the whole bunch with the help of producers like Jean Saliba.

Jad Choueiri with his hoard of female singers also attempted to get into the game later on. Names like Madeleine Matar released Arabic dance tracks that modern Arabs could relate to. Even the 'dramatic' Carole Samaha could not resist and caved in to the Pop Wave.

During all this time and in the Maghreb region, the Rai sound got a new kick-start and went transatlantic with Cheb Khaled, opening doors for Rachid Taha, Cheb Faudel, Cheb Mami, Samira Said, Latifa etc.

Other Middle Eastern artists known for their fusion sounds such as Nawal El Zoghby also released a few Rai inspired tunes, adding to their already rich portfolio of contemporary Arabic music. Nawal also launched the Khaligi-pop trend in the Arab World, in addition to her other fusion music that mixed Samba, Salsa and Western Pop.

With their clever music arrangements and compositions, names like Hadi Sharara, Tarek Abou Jaoudeh or Jean-Marie Riachi gave a touch of modernity to all the Arab singers they worked with, contributing to their success and their many innovative hits. Yuri Mrakadi was one of those earliest artists, and his album Arabion Ana still holds up very well to this day.

Young Arab Composers, such as Amr Mostafa, thought up up some inspiring melodies that became big hits after they were enfolded in the right music.

Some DJs, such as Said Murad, also made a legacy for themselves by mixing old classical tracks like Um Kulthum.


Parallelly to all that, many underground bands and artists like Yasmine Hamdan (Soapkills), and much later Mashrou3 Leila, etc. were also doing their own thing, experimenting with alternative sounds and adopting a new approach to Arabic Music. Other projects like REG with Ralph Khoury and Guy Manoukian showed a lot of promise. Natacha Atlas headed the clan, when she teamed up with Transglobal Underground to offer us Contemporary Arabic Trance. Her hypnotic oriental melodies were backed up with electronic music, making them more accessible to a universal audience.

New genres surfaced on the Arabic music scene like oriental electro-pop, Arabic house, dance, techno, Arabi Electronica or even rave...The trick was not just to put Arabic lyrics on western music or melodies, but rather to innovate and bring forward totally brand new creations that remained Middle Eastern at heart.

The process was somewhat accelerated with the arrival of Hayfa Wehbeh, and the trend she set off. Like her, many other beautiful Arab women also wanted their share of stardom. Given their limited vocal abilities, their producers had to come up with new ways to propel them further in the music industry. Other than the hot visuals and videoclips, the bet was mostly on equipping them with very catchy and innovative tracks. Because of this extra care, such singers were often the ones to release the most modern Arabic dance tunes, in synch with international mainstream Pop. More 'serious' artists that had been shadowed, reacted by also adopting a contemporary sound.

Today, although we still have to put up with the occasional disaster songs (aka Mohammad Skandar Jamhouriet Albi) that are bad reproductions of previous forms of Arabic music, most hits are produced following an international level with a contemporary sound. A clear ambition to innovate and create is replacing the old habit of merely copy-pasting previous experiences. This is what Art is all about anyway.

Still, some are getting trapped into the same old pattern, but this time by copying western "formulas" instead, and simply adding Arabic lyrics to them!


A production studio called New Wave headed by Walid Al Massih has recently appeared on the scene with Maya Nehmeh, and could become the next leader in this New Generation of Arabic Music. It’s called New Wave for crying out loud, coincidence?! See Maya Nehme Michta2 Interview.


We are now witnessing a strong electro trend in Arabic music, as more and more young DJs make a breakthrough on the International scene, such as ElectrowaveZ, that has joined the ranks of other popular projects such as YAS Mirwais Yasmine.

2011 is around the corner. What sort of Arabic music will the next decade give us...stay tuned:)

This was a general overview of the Progressive Arabic Music Scene of approximately the last two decades. It is rather Sketchy, but still gives a good idea of how music is evolving in the Middle East.