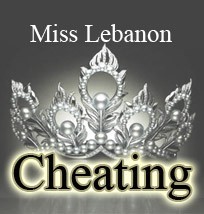 The Miss Lebanon Pageant has been infested with corruption ever since its creation. Every year, a "jury of experts" imposes upon the Lebanese public an unsatisfactory queen, solely based on her contacts (wasta) . Stories of bribery are also very common.

The competition of 2011 was supposed to be different as we were told it would be for the first time under the complete control of the Ministry of Tourism, and supposedly there wouldn't be any cheating...yet some sources are already confirming that the winner has been picked in advance out of what is being described as the weakest batch of contestants ever (an intentionally poor selection?)...

We will just have to wait and see:)


In another ironic incident, Miss Lebanon 2010-2011 Rahaf Abdallah was caught cheating at a final exam in LAU!

In late June 2011, Rahaf was reportedly caught cheating while at a final exam in a CS course at the Lebanese American University. Someone had apparently leaked the exam questions to the beauty queen, and as she was submitting her paper (and breaking the record with only 15 minutes after the test had begun, for a test that should normally take about 2 hours at least), the crib sheet with the cheat answers fell from her. The proctor saw the paper as she was quickly picking it up and insistently asked for the "rachetta", but Rahaf managed to change the conversation every time as she smuggled herself out of there.

This scandal surged all over the internet after it was first published on al shabaka magazine, but Rahaf denied the incident, insisting it was a mere slander.