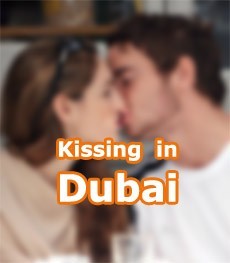 On Tuesday the 6th of April 2010, The Dubai appeals court sentenced the British pair who were kissing in public for a one month jail sentence.

The couple (pair) who were caught kissing in a restaurant in Dubai were Charlotte Adams, 25 years old and Ayman Najafi 24 years old. The pair got arrested November 2009 on charges of kissing intimately in public after consuming a large amount of alcohol.

An Emirati woman who was at the restaurant complained that her 2 year-old daughter saw this indiscretion and obscenity.

The Kissing pair paid a fine of 1000 Dirhams 272 = US dollars for illegal consumption of alcohol and will be deported after serving their jail sentence of 1 month.

The pair argued that they are not a couple, and that they only exchanged a friendly kiss on cheeks as a form of greeting, a kiss which is very common in the world.

The lawyer of the kissing pair, Khalaf Al Hosani, told the court in a previous hearing that they never intended to break the law by being obscene.

It is good to note that this is the third case like that in less than two years that people from Outside Dubai have fallen broken the indecency laws in Dubai.

In the year 2008, a Similar case happened with another British couple who managed escaped jail after a court found them guilty of engaging in drunken sexual activity out of wedlock and in public on a beach in the emirate.

In a similar case in 2010, a British pair shared a hotel room and were able to escape trial in Dubai court for having sex out of wedlock by producing a marriage certificate.

Help us improve this page:   Correct or update the Dubai Kissing Couple page