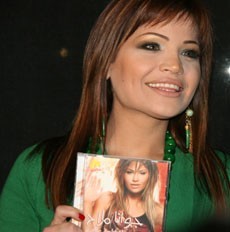 Ever wondered what Album Launch Parties in the Arab World are like?

Most Arabic Pop CD launching events are done in Beirut, Cairo and Dubai, and half of those are organized in Virgin Megastores.

Well The Fanoos Team was invited to a private party in Beirut held for a similar occasion, and here is how it went.

Joana Mallah made a splashy entrance for the launching of her new album “HATIFDAL FI ALBI”, which took place on Wednesday evening on the 15th of March 2006 at Taboo in Downtown Beirut.

That night, we had arrived a bit late to our private party. The bulky security guards at the entrance were friendlier than usual, immediately showing us the way in. After all, we were VIP guests :) Usually one would be asked to wait in line, or worse, would be turned away for not having made prior reservations. But not tonight!

We were directed to our seats, where our goody bags awaited us: a cassette and CD of Joanna’s latest album wrapped up in a pink ribbon. That was enough to put a smile on our faces…

The dim lights in the room were enough to delineate the silhouettes of those present at the tables around us. Most of the Lebanese and Arab media had representatives there covering the event. A few seats were still empty but only remained so for a short while; We weren’t that late after all…
Small circles of private discussions mushroomed here and there, competing with the hip background music, which was no other than Joanna’s latest songs.
A big screen was continuously running the video of “HATIFDAL FI ALBI”(directed by Jad Shweiry) completing the nice atmosphere which was being created.

We could identify a few celebrities, such as Nathalie Fadlallah and her “gang” of models. They had seized one corner of the location, where they seemed to have organized their own private party! (Sorry we don’t have any pics to illustrate, because our photographer was a bit shy that night).
A few Nancy Agram look-alikes were also scattered all over the place. We couldn’t really identify any of them, but they were surely getting their share of attention ;)
The women were also treated to some good looking men: a sexy DJ, a few well built waiters, not to mention some well groomed guests..
All in all, this was close to a jet set party. However, if you are familiar with Lebanese nights, then this still remained luke warm in comparison.

Suddenly, the room lit up with flash lights. The diva had arrived!
There she was with her radiant smile magnetically inviting photographers to let lose of their “snaps”. Within a few seconds, a big crowd assembled around her.
The latest shift in Joanna’s musical style was being echoed here by a more modern physical appearance. She had tight jeans on, a stylish green top and a big extravagant yet elegant necklace made of green pebbles. Of course she had her CD in the hand, parading it around. Or shall we say her new baby born. This went on for a while…

We would like to share with you these few photos we took at the event. We can’t really tell you what happened next because we only stayed for a short while afterwords, then had to leave for some other engagements. If you were there, then maybe you could fill us in on the rest of the evening.


Concerning the album itself, we would like to congratulate Joanna on the remarkable work done. Most people would enjoy listening to all the featured songs without skipping anything. This is usually very rare in music albums!

She has finally found the style that best suits her, focusing more on the strong points in her voice. The music is very modern, sometimes a bit “underground”, while keeping an oriental characteristic. The album is also very varied, swinging from Oriental Spanish Pop, to slow, to dance etc...