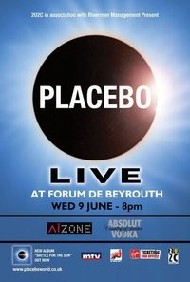 Activists groups, including the Campaign to Boycott Israeli Supporters in Lebanon and the Campaign for the Lebanese Boycott of Zionism have called for the boycott of British rock band Placebo which will be performing in Beirut on June the 9th. This comes after lead singer Brian Molko announced his 'endorsement' of Israel in a recent interview after a gig in neighboring Israel. The call comes just a few days after US alternative rock group The Pixies and two other British bands canceled their gigs in Israel after the aid flotilla storming incident.

Help us improve this page:   Correct or update the Activists Boycott Placebo page