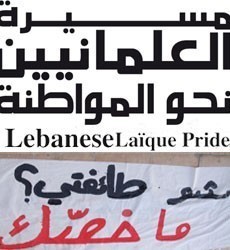 The Lebanese Laïque Pride is an active group that was created to launch a Secular March Towards Citizenship.

Some of the founding activists include Saïd Chaitou, Kinda Hassan, Yalda Younes and Ghassan Nader (France).

To note that some members of the Laïque Pride joined other groups in the Lebanon Protests.

In 2011, another march was planned for the 20th of March, but was later postponed.

Here are some of the Laïque Pride guidelines for their movement:


"All the Lebanese are equal before the law. They enjoy equal civil and political rights and are equally subjected to public charges and duties without any distinction whatever."
(Art.7 Lebanese Constitution)

We are Lebanese citizens who wish to live in dignity and equality with other co-citizens. Armed with public and private rights and liberties warranted by the Lebanese constitution, we mobilize for a civil secular state founded on citizenship, guaranteeing the expression of the country’s diversity and securing social justice, one of the main foundations of civil peace.

- laws respectful of human rights, public and private liberties as well as gender equality,
- a strong, impartial and independent judiciary,
- a Lebanese civil code for personal status,
- the abolition of institutional sectarianism,
- the strengthening of education on citizenship.

The Laique Pride is a movement seeking to gather the different shades of the Lebanese secular fabric. The march is a yearly meeting to make our voices heard and to put a face on our demands.

The Laique Pride encourages and supports every movement and organization working towards a more egalitarian society. It does not claim or intend to substitute secular actions underway all through the year, but rather wishes to inspire new citizen initiatives in Lebanon.

We are a citizen movement that refuses any political recuperation.

Help us improve this page:   Correct or update the The Lebanese Laique Pride Group page