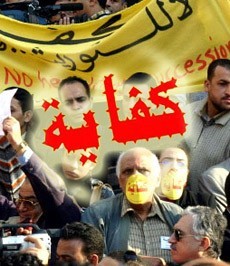 Kefaya is an Egyptian Movement for Change, founded by George Ishak.

Kefaya, also written Kifaya, is a national coalition movement that regroups various activists from across Egypt’s political spectrum. It opposes the ruling party of President Hosni Mubarak and seeks its end.

Although the organization became public in 2004, its origins date back to the year 2000 during the political protests which spread in Egypt following the start of the Second Intifada in Palestine.

Kefaya achievements include a referendum on 25 May to approve changes to the constitution, calling for the first multi-candidate elections for the presidency in Egypt. Kefaya also moved forward with demands during the second Presidential election itself. Kefaya also took part in the latest protests organized by the opposition in January of 2011.

Due to internal conflicts, the movement lost momentum and was overshadowed by other newly created groups such as April 6 Youth Movement Egypt led by Israa Abdel Fattah.

Help us improve this page:   Correct or update the Kefaya page