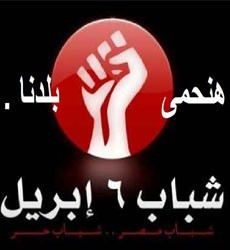 The April 6 Youth Movement is an Egyptian group in the opposition, seeking a regime change.

The April 6 Youth Movement or Harakat shabab 6 avril was created using online networking tools (like Facebook) by Israa Abdel Fattah and Ahmed Maher in Spring 2008 (group created on March 23rd), and regroups bloggers and activists from all over Egypt, with a strong women presence.

The movement was initially launched in solidarity with workers who were planning a strike on April 6, in the Delta industrial city of al-Mahalla al-Kubra. As the protests escalated into a nationwide strike, the Facebook group gained momentum and eventually came together into a political movement known as the April 6 Youth Movement. It kept the name later on.

The April 6 Youth Movement seeks political and economical reforms in Egypt, including the end of Hosni Mubarak's regime.

Harakat shabab 6 avril followed in the footsteps of previous protest movements and groups such as Kefaya. The April 6 Youth Movement is not a formal political party, but has more than 70,000 online members, most of whom are well-educated and politically unaffiliated Egyptians.

In January 2011, the April 6 Youth Movement Egypt initiated one of the largest protests in the country, backed by other groups and personalities such as Ayman Nour, Muhammad Al-Baltaji, Mohamed Elbaradei, and George Ishak. Although the Internet in Egypt was cut off by the Mubarak regime, many bloggers and internet activists such as Hosam Yahia and Asmaa Shehata remained very efficient and determined to achieve change.