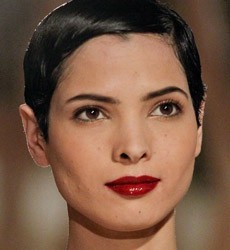 Hanaa Ben Abdesslem is a Tunisian runway model, based in Paris.

Hanaa Ben Abdesslem made her first runway show in Vivienne Westwood's spring 2011 show in Paris, but it was her Givenchy couture exclusive (when she cut her hair short) that really got things moving for her. She also walked for the spring Chanel and Jean Paul Gaultier couture shows in Paris.

Help us improve this page:   Correct or update the Hanaa Ben Abdesslem page