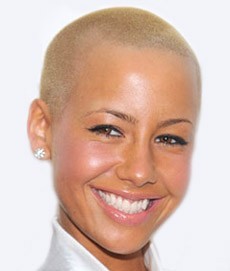 Amber Rose is a famous American model. She was born on the 21st of October 1982 in Philadelphia, Pennsylvania. She love life started with a relationship with rappers Kanye West passed in a rough path. She later started a new relation with famous Rapper Wiz Khalifa.

In 2009, Amber Rose made public her plan to launch her own line of eyewear.

She walked the runway at New York Fashion Week for "Celestino".

Amber Rose was also the new face of "Boadicea the Victorious" perfume.

Rose has also made cameos in music videos such as Ludacris' "What Them Girls Like", Young Jeezy's "Vacation", Mary Mary's "God in Me", Nicki Minaj's "Massive Attack", and Fabolous "You Be Killin' Em"

In 2010 she appeared in the Russel Simmons TV reality show. She also starred in a PSA as part of the NOH8 Campaign.

In 2011, Amber Rose was a guest judge on the third Season of the RuPaul Drag Race Show.

Help us improve this page:   Correct or update the Amber Rose page