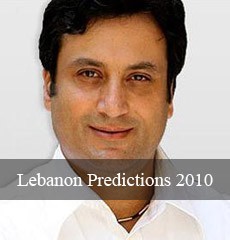 Here are the predictions of Hayek for the year 2010. To know more about other country predictions make sure you visit the Michel-Hayek 2010 Predictions Arab Countries

Unusual financial facilities to enable all willing to Lebanese from owning an apartment, despite high real estate prices.

A project that aims to replace old cars with new cars for those who wish within the unique facilities of its kind for the first time in Lebanon.

Lebanese women to shine through the large visibility in the high-level positions and through its leadership of the movements and parties.

Lebanon theater of the most important role of the fashion world.

The beginning of major expansion freely extending from Lebanon to Lebanon, green and blue upswing over the water.

Re-consider a number of agreements between Lebanon and Syria.

Reconciliation would be done between several directions and will grow and we'll see a bridge and a firm and slowly extends between the suburb and Muarab.

Read the name of President Michel Suleiman in the record of awards and accolades to the world.

Existing municipal elections, punctuated by the tide and major differences.

Outside the court following the Lebanese and the international trial proceedings remarkable substance.

Maronites of Lebanon to the date of the merits Msarip and fateful.

Be detected fate was unknown for a long time.

The beginning of a new twist to the fate of the Palestinian Popular Front Ohamdghebrel.

Lebanon's readiness to visit the Syrian leader Walid Jumblatt, but will not be long sleep known as sleeper cells, which in my opinion, wake up, sometimes to try to do security work and at other times to capture some of its elements.

Boiling will not remain within the Free Patriotic Movement, but extends to a wide area around it.

Point of non-Lebanese intelligence related to the local security authorities to learn there is a plan for a major operation on Lebanese territory.

Generous of the Armenian community is preparing to make changes to some of the delicate and sensitive sites.
The face of a famous name is associated aircraft enveloped in mystery and the face of another well-known to be arrested on the territory of an airport.

To raise a fuss about a plane on board and around the scene of armed conflict.

Acceleration of the names on the line Bikfaya Bitigreen.

Dismissal takes the form of resignation from the post high-pressure backgrounds controversial.

The birth of the fundamentalist movement the heart of the mountain Druze.

Confusion and wide raised about the advent of well-known figure to Lebanon up to the degree of pressure on the authorities not to receive them.

Visits are important for the relationship with Hezbollah; one of it and the second at him, give rise to questions and visits the local community and international levels.

Echoes of a new name associated with Sheikh Naim Qassem.

Insidious attempts to stab the great flag of Hezbollah, but will remain visible despite the seriousness of the event.

Israeli-Lebanese border on the date of blood and martyrdom.

Despite the presence of UNIFIL and the Blue Line and the international resolutions remains an open area in front of ambushes and the Lebanese and Israeli parties.

Attack on the children of a Lebanese family from the mid-known.

Public concern on the character of a mass held the title of president.

Noise and wide-line secret between Lebanon and Israel following the exposure of the true identity of the face moving between the two special missions.

Meerab and some symbols associated with the control out as highly aggressive.

A sudden and forcible closure of the Center is education.

Earth crust movement threatens a group of houses and destruction of some of the monuments.

Pending the Minister Ziad Baroud, a strip of severe clashes reach the level of rigidity ominous.
New episodes of the series demonstrations in some locations in Lebanon.

Marada to the expansion of intelligence and without rebellion and the positions of Deputy Suleiman Franjieh constitute a solution to the major obstacles while contributing to worsening the third node and the motherboard does not this give some of the danger.

A scandal in the religious entity shaking segment of society.

Preoccupied with the Free Patriotic Movement follow-up story with a correlation Deputy Ibrahim Kanaan, one of the most visible faces.

Interpol lead the forefront after a series of face involved.

Justifiable issue of jurisdiction is not without problems-violent.

Monitor the process some call it a smuggling operation, and some other process is suspect.

Lebanese forces are playing a prominent role on the international relations.

I think Mr. Nader Hariri in the form of the "provocative."

Surrounded by a convoy of a state of extreme panic.

Minister Gebran Bassil under the most severe degrees of political pressure, but the ratio of the electric light up the streets after a wave of problems and a period of darkness.

Question marks around the house the center and some gray clouds in the blue sky.

Exposed many of the people of politics and art, including new faces to the problems of health platforms.

A name and the name of the city of Zahle MP Nicola Fattoush addresses to a new phase of confrontation minute.

Help us improve this page:   Correct or update the Michel Hayek predictions for 2010 page