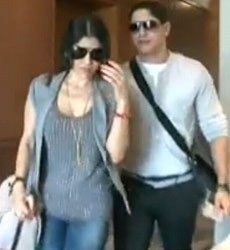 Haifa Wehbe Divorce from Ahmad Abou Hashima is expected to unfortunately occur very soon, if we are to believe the Celebrities Psychic Predictions of Leila Abdel Latif.

Some tabloids highlighted the domestic problems Haifa is facing with her Egyptian husband that supposedly led to physical violence, which Haifa has categorically denied.

In interviews and at press conferences, Haifa continues to assert how happy she is with her husband, and laughs at the idea of divorcing her dream man...

Nidal Al Ahmadieh was accused of trying to break up the couple and attempted to contact Hashima for a scoop about the divorce. Here is what Hayfa Wehbeh had to say .

Help us improve this page:   Correct or update the Haifa Wehbe Divorce page