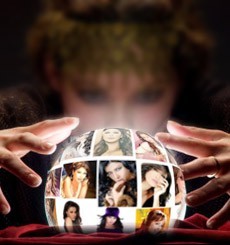 These are special psychic predictions by Leila Abdel Latif for Arab Celebrities for the year 2011.

We are just the messengers! if you don’t like these predictions or think some of them are lame, you know who to thank;)

Nawal El Zoghby: Will meet a new man and gets engaged / married. It will take her some time, but she will make a gradual come back.

Mohammed Abdu: Success. He will take part in mahrajenet in Lebanon. 2 songs in particular will be hits.

Elissa: Success. 3 singles out of her album will be big hits. She will get married to a non-Lebanese.

Najwa Karam: Big success. She gets married/engaged. One song in particular will be on everyone’s lips. Big Hit. She will work outside of a music production company.

Rashed Al Majed: He will do a duo with a male singer. He will take part in a big mahrajen in Beirut Down Town.

Ahlam: Success. Nice year for her. She will do something big in the USA, and surprises everyone towards the end of 2011 and will release 2 big hits.

Amr Diab: He will be occupied in other stuff like business etc. Artistically, he will drop in these coming 2 years. He is not at ease.

Walid Toufic: He won’t show any signs of success or advancement.

Tamer Hosny: After acting and singing, he will start producing and directing!

Ragheb Alameh: Success bigger than everything he has had so far. Big mahrajen in Down Town Beirut.

Wadih El Safi: A remix album of his old songs will be a huge hit, ‘ykasser el ard’

Fairouz: She will be in Baalback, in Casino Du Liban… She will take part in an international event and will be mentioned on CNN.

Sabaah: The TV series that is based on her life will be a success. People will learn hidden secrets and will love her even more.

Carole Samaha: Success of the TV series mentioned above, in which she is playing the leading role as Sabbouha. She will also be at Casino Du Liban.

Nancy Ajram: Her success will be better than that of the past two years, during which she dropped a bit. Nancy will also divorce.

Majida El Roumi: Constant. She will do some new songs, but nothing special.

Hayfa Wehbeh: She will star in an international Hollywood movie, and appear in international advertisements. Haifa will sing in an English duet (Ajnabeh, so could be also French ;) next to a foreign star , in what will be a big hit, tkasser el ard. (You might want to check our interview with her where she actually talks about that: Sexiest Arab Woman of our Era). Leila also predicted Haifa Wehbe Divorce.

Help us improve this page:   Correct or update the Celebrities Psychic Predictions page