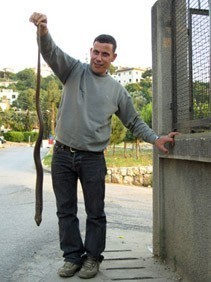 How to Exterminate Snakes

How to Get Rid of Snakes: Like in everything, prevention is always better then the cure...

Control Methods for Snakes: To keep snakes away you should first clear out areas that could be attractive to snakes. Snakes generally avoid humans when possible, so all isolated and quiet areas around the house or quiet corners in the yard are suspect. Keep the grass mowed, remove woodpiles & rock piles. You also need to make sure you don't have mice or rat infestations, as this is a source of food for these reptiles. Snakes eat mice (among other things) and tall grass could attract mice. Eliminate all hiding places and more importantly eliminate all food supply; when there are no rodents, bugs or insects on the premises, snakes are not likely to be interested in settling in your area.

Man Holding Dead Snake (above photo): This is a photo we took in May 2011 of Ahmad Taha. Ahmad is from Mansourah Egypt, but lives and works in Lebanon. He was the hero of the day, as he killed a 2 meters snake using a shovel. He says he had killed many before, some of which were even larger.

Paradoxically, for all these reasons, snakes are actually beneficial. By controlling rodent populations, they limit the spread of diseases and parasites. Rodents have been the culprits in several past plagues that have killed thousands of people. Left unchecked, rodents can also destroy crops and invade homes in search of food.

A snake in the garden helps deter unwanted visitors such as rabbits and birds, and some snakes, like the nonvenomous king snake, even eat venomous snakes such as cottonmouths and rattlesnakes.

If you don't have a good mouser cat, consider getting one if you are at risk, as it could be effective in scaring them away.

Never leave your doors and windows (without a net) open and unattended. Areas around doors, windows, electrical outlets and pipes should be properly sealed to discourage snakes from moving in. Because they are very slippery and very flexible, some might still get in from underneath doors, through the air conditioner vents, through a dog door, through the roof even...


Snake Repellent to keep snakes away: In Lebanon and the rest of the Arab World, they use something called "Otran". It supposedly keeps snakes away, but it has never really worked for us.

"Snake away" powder, Sulfur, Moth balls are sometimes also used but are not guaranteed. Diesel and kerosene gasoline is thought to scare them off, but also this is just a say.


What to do when you find a snake: If you happen to come across a snake on you property, it is advised not to touch it or get very close to it, as you could get bitten; it is often hard to determine whether its a venomous or non-venomous variety.

If it's in your yard, you have the option of ignoring it hoping it leaves on its own, otherwise (if its inside) you should obviously call a professional exterminator.

Generally snakes are as frightened (if not more) from Humans then humans are of them, and they are as anxious to avoid you as you are to avoid them. But if you encounter a snake and it does not move away, then start slowly backing up.

Most snakebites occur when the animal is stepped on or otherwise harassed. When cornered, snakes become very aggressive. If you simply have to kill it yourself, remember that a snake can strike at a distance of about 2/3 of their body length approximately (even more if the temperature is above 85F). Some species even spit venom from a distance!

You can use a shovel, or a heavy duty mop for smaller specimens (see video below) to hit the snake repeatedly on its head. Make sure you don't miss!

The Lebanese nun in the funny video below is dubbed the "Undertaker Sister" and is called upon to the rescue whenever a snake is spotted in Deir Kaftoun, a convent in the north of Lebanon. The courageous sister is used to killing a dozen of these every week, especially during high season. We shot this video around September 2010, while we were visiting the old Church in front of the monastery.

We do not recommend you attempt this yourself. Attempting to beat a snake to death is a sure way to get bitten. 80 percent of the venomous snake bites are said to happen while someone is catching or killing a snake! Studies suggest that it is rare for a snake to let itself be scared by humans more than once in its life, so stories of snakes returning for revenge after a failed attempt is just fiction. They do learn, and chances are they will avoid moving in areas near humans after you frighten them off.

How to frighten a snake away: You can use a Long tool (it is always wisest to keep at all times one snake-length of room between you) to push it away, because hitting or striking a snake may panic it and cause it to move closer to you in an attempt to get away or to defend itself. If you hurt the snake, it is likely to try to bite you, but if you merely annoy it, it is likely to go away with little fuss.Turning the garden hose on it is another good way to make the snake move. When the snake starts to move, make sure you move quickly in the opposite direction.


What to do if you get bitten by a snake: If you are bitten by a poisonous snake, you should seek medical care immediately. Very few people die from actual snake bite, so you must relax so as not to go into shock. Just try to remain calm, and get to the nearest hospital, regardless whether you know or not the type of snake that bit you. A simple blood test can be done at the hospital to determine the type of venom in your system. Do not use a snake bite kit that involves the cut and suck method of treatment, as it causes more harm than good.


If you have photos of yourself taken with a dead snake you have killed, or posing with your pet snake you may share them with the other readers by uploading them to our photo gallery.

Help us improve this page:   Correct or update the How to Exterminate Snakes page