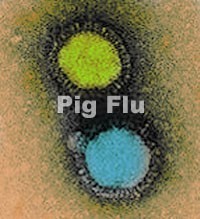 The Pig Influenza or Pig Flu also known as Swine Flu is a respiratory disease which first developed in pigs and was caused by type A influenza. However the contact of humans with pigs transmitted the flu to humans.

The first occurrence of the Swine flu was back in December 2005, however only 12 cases where found until February 2009.

The outbreak started in March 2009, when a number of confirmed human cases of a new strain of swine influenza A (H1N1) virus infection in the U.S. and Mexico.

In sever conditions respiratory failure can cause death, and it can quickly move from mild to sever infection.

The Pig flu virus can be transmitted from Person to Person through sneezing or cough.

Antiviral drugs works best to cure the flu in some cases within 2 days of symptoms.

There are no specific ways of treatment yet for the Pig Influenza.

If you get sick or become ill with symptoms of pig flu, make sure you contact your health provider or family doctor at once.

The doctor will determine if you have the pig flu, in the initial stage make sure to stay at home and get rest until you feel better.

Children might be contagious for a long period, so extra care need to be provided.

In kids, the Pig Flu symptoms include:
fast breathing, not drinking fluids, fever with rash and cough.

Pig Flu Fact:
The Pg flu or Swine Flu is not spread by food.