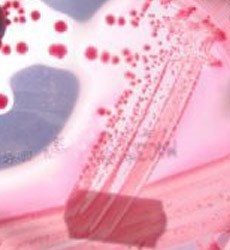 E. Coli Bacteria (Escherichia coli) are bacterial germs that may cause severe cramps and diarrhea.

E. Coli Bacteria generally inhabit the intestinal tract of humans and other warm-blooded animals, and whereas some kinds of E. Coli bacteria are actually beneficial, others may cause disease in humans, such as urinary tract infections and other types of gastrointestinal infections.

So far more than 700 serotypes of E. coli have been identified, with the notorious E. coli O157:H7 being responsible for the numerous reports of outbreaks traced to the consumption of contaminated foods and beverages. These serotypes produce Shiga toxin (Stx), one of the most potent toxins known to man. E. coli O121:H19 is also known to cause hemorrhagic colitis and post-diarrheal.

People usually get infected by eating undercooked ground beef or drinking contaminated impure water or unpasteurized infected milk. E. coli can also spread from an infected person's hands to other people or objects, when hands are not washed well after a bowel movement. Infections are known to occur more during the hot summer times.

Symptoms of E. coli infection start about a week after contamination of your system by the germ, and include severe and sudden abdominal cramps, watery diarrhea of bright red bloody stools (The infection is known to make sores in the intestines), and some people also have nausea and vomiting. The treatment of the infection is usually limited to drinking a lot of water so as to avoid dehydration, with serious cases taken to the hospital to have fluids put into their veins via an IV.

Recently in May 2011, a large scale E. coli outbreak hit Europe, mainly Germany. The dangerous bacteria reportedly killed three women and left hundreds ill. A German health organization traced back the spate of E.coli infections in Germany to eating enterohaemorrhagic E. coli (EHEC) contaminated raw salads, tomatoes and cucumbers from northern Germany. According to the World Health Organization, HUS is characterized by acute renal failure and blood problems, with a fatality rate of between 3 to 5 percent, and may also cause seizures, strokes and coma.

Help us improve this page:   Correct or update the E Coli Bacteria page