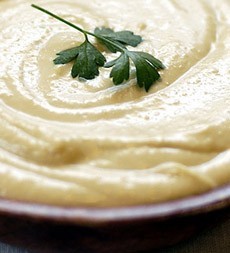 Hummus also known as Hoummous or Hommos is a dip made of chick peas, sesame paste, olive oil, lemon juice and garlic while tabbouleh is a salad made with parsley, bulgur wheat, scallions and tomatoes.

Hummus is originally a Lebanese dish, but through-out the years this special vegetarian dish became a dish for most countries around the middle east such as turkey, syria, greece, israel and other countries.

Hummus is also known all over the world, especially in north America.

Help us improve this page:   Correct or update the Hummus page