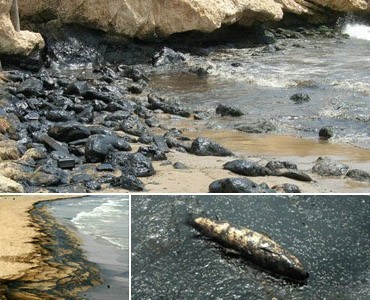 Environmental Disaster along the Mediterranean Coastline of Lebanon

Since the war started 3 weeks ago, a Massive Oil Spill has been spreading over 60% of the Lebanese coast along the east side of the Mediterranean Sea. Areas that are heavily affected include, Damour, Jiyyeh, Rmeileh, Saida, Tyre in South of Beirut. Also the beaches along Ramlet El Bayda and Sporting Club in Beirut. Areas north of beirut, including Jounieh, Jbeil and Tripoli seaa sides are heavily affected too.

The oil spill is considered as one of today's greatest environmental disasters in the history of the mediterranean.

It is expected that this environmental disaster will cost the government over 70 million dollars to clean up.

This environmental disaster began with the leaking of oil into the sea after israeli aircrafts targeted oil tanks in the jiyyeh south of beirut.

for further confirmation of this environmental disaster created by the israeli human rights violations, please see the photos taken for the coast at many locations in beirut. Environmental Disaster & Oil Spill Photos images are provided by the Lebanese Ministry of Environment.

The technical information provided below including the Impacts on the Environment, on Human health, on Tourism, Biodiversity, Fishing Industry and Other Shoreline are copyrights of the Ministry of Tourism. The publishing of the material below has been subjected to a direct permission from the Lebanese Ministry of Environment, for more details visit www.MEO.gov.lb

Some Impacts on the Environmental

A· The marine ecosystem (fish species) is active in the summer and has been adversely affected, but the degree of damage cannot be estimated at this point in time. Thankfully, the bird migratory season had recently ended and therefore the numbers of birds effected is expected to be low.

A· A small percentage of the heavy fuel oil might have evaporated due to exposure to the elements and does not have a lasting effect.

A· A small percentage of the oil might be naturally decomposing because of the natural biodegradation process.

A· A large percentage of the spill has emulsified and solidified along the Lebanese shore, clinging to sand, rock and stone as the pictures will show.

A· Some of the biological impacts after an oil spill can include:

o Lethal or sub-lethal toxic effects on the marine life

o Changes in the marine ecosystem resulting from oil effects on key organisms e.g. increased abundance of intertidal algae following the death of limpets which normally eat the algae.

Some possible short term adverse effects might include nausea, headaches and skin (dermatological) problems in residents living close to the effected areas or in beach goers getting in touch with the oil.

Plant crops and animal products from coastal farms close to the oil spill sites might have to be tested for hydrocarbon content to be declared safe for consumption.

The Ministry does not advise fishing off the quays and wharfs found along the coast from Jieh to Heri-Chekka until the complete scope of pollution is assessed.

Many public and private beaches have been heavily affected including boats/ships of fishermen and yachts and boats of tourists from all over the Arab world and the Mediterranean countries as well as boats of Lebanese nationals.

Beach-based tourism was a major economic activity in Lebanon and constituted a major part of the Lebanonâ€™s gross domestic product (GDP).

Impacts on Biodiversity & the Fishing Industry

It is not possible at this moment to evaluate the impact on biodiversity because of the need of more detailed technical assessments carried out under safe national conditions.

The siege on Lebanon by the Israeli army has prevented the Lebanese fishermen from going about their daily work. This oil spill has added to their crisis by destroying the immediate marine habitat of the fish species off the coast. However, it is well documented in the literature that the concentration of polycyclic aromatic hydrocarbons will be elevated above background concentrations over a substantial area. Biodiversity will surely suffer as in Lebanon it is highly concentrated on the coastline.

The Lebanese coastline is made up of mainly rocky shores. The initial estimates show that the mortality of limpets and other herbivores is high. Further detailed studies need to be carried out to assess the true scale of the damage.

Help us improve this page:   Correct or update the Environmental Disaster along the Mediterranean Coastline of Lebanon page