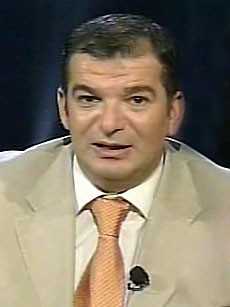 Tony Khalieh also spelled as Toni Khalifeh is a renowned Lebanese TV Presenter, who started his career at the Lebanese Broadcasting Corporation - LBC. Tony is one of the major TV presenters when it comes to both Game Shows and Entertainment Celebrity Talk Shows.

Tony was discovered by Simon Asmar, and first started hosting simple TV Game Shows at LBC, especially during the holy month of Ramadan. The public originally found him very antipathetic; He didn't have any particular skills, nor was he that photogenic. Simon even made him undergo a soft nose surgery to improve his looks, like most of his other proteges.

As the years passed, Tony was given a bigger role in LBC entertainment show; Saa Bee Orbel Habib and Miman Yajroo Fakat, are two shows which gathered viewers from all over the globe who wanted to watch Tony Khalifeh Interview Celebrities and make them cry on air!

Tony Khalieh had a single acting experience with singer Dominique Hourani in a Lebanese Television series called Oyoun Khaena (Eyes of a Deceiver). He was so terrible in it, that he was the first to admit failure in his first attempt.

Tony Khalifeh then became the host of a program produced by Noogoom Television and LBC Group, which was shot in Dubai and was entitled Haza Ana (That is me).

Later on, Toni moved to Al Jadeed TV where he presented TV shows such as: Al Forsa, Dolarat W Siyarat and the famous Lel Nasher.

Tony got married during the year 2005, ending the rumors that he was gay.

Help us improve this page:   Correct or update the Tony Khalifeh page