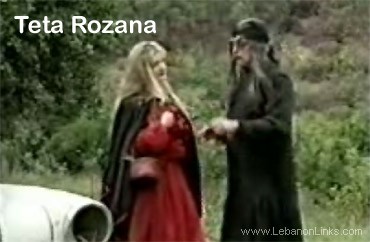 Teta Rosana, the trendsetter in sarcastic TV shows is back!

All the satire shows you see today on our TV channels, no matter how funny and creative, are mere copies or more exactly wannabes of an earlier cult show called S-L-CHI or “the most irritating”. The show was actually the initiator of this genre in Lebanon and in the whole of the Middle East. In Lebanese slang, we can definitely say without hesitation “Kassar el ard!” .

Back in the days when it was still running, whenever it was on air, you could bet your bottom dollar (we mean Lira lol) that the streets would be completely deserted. Wala doumareh! And not because of the political situation in the country! It was very innovative for its time, and there was nothing like it. The most loved character on the show was no other than Teta Rosanna, an old woman, with a hilarious uninhibited behavior, played by the talented Raiif El Baba. That was mostly why everyone watched the show. The other characters were a bit dull and showed limited talent. They were probably just fillers, with all due respect. But not the out of control Teta Rosana! Raiif El Baba was also probably the first Lebanese male comedian to dress up as a woman so as to take the show’s burlesque aspect one step further reaching completely surreal and hysterical levels.

Alas the show got dissolved, and the members split, creating similar shows scattered on all the other national televisions.

The good news today is that Teta Rosanna is back, on National Broadcasting Network - NBN this time in a program called (Kel Shi Elo Shi), but along a totally new cast…Will the legend continue baby ???

Or will this come back rot all the good memories we still have?

What do you still remember of the previous show? How do you see Teta Rosana’s come back?

Which is your favorite TV satire show? Do you think Teta Rosanna will be able to compete and take back the spot lights?

Help us improve this page:   Correct or update the Teta Rozana The Return page