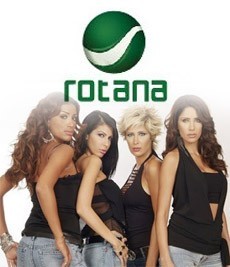 Technical problems made Rotana Music TV Channel play one of the 4 Cats videos over and over again nonstop, for at least 3 hours around noon on 30th of June! This is at least how long we kept checking back before we got fed up; it might have lasted even longer. The video, which was shot in Dubai by Shadi Hanna, also features the manager of the group Ghassan El Rahbani. Incidentally, the title of the song “Tal Intizari” was quite appropriate, given how long one had to wait before Rotana would finally notice there was a problem.

This came only one day after Maya Diab announced she will be leaving the 4 Cats, an all girl group that has been low-key for a while now. Well anyway, never have they been so popular on Rotana! An amusing fact about this group is that the only member to have lasted since its creation is Dalida Chammai, no other that Ghassan’s own wife. Many of the girls that left the group ventured into a solo career, such as Nicole Saba or Nisrine Zreik.

Tune into Rotana now. Who knows, they might still be running the video.

Help us improve this page:   Correct or update the Technical Problems on Television Rotana Music page