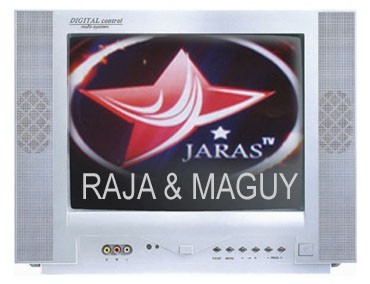 Al Jaras Television has reached a new low in television production with their two anchors Raja and Maguy, in the meaningless program “Shou El System”. Two very conceited individuals, who laugh hysterically on air to their own silly jokes, right after they insult their viewers with their obvious ignorance, not to mention their constant disrespect to callers and SMS senders.

I actually came across the show by mistake this evening and was honestly disgusted by it!

It is hard to say whether their lack of professionalism is an act or whether that’s just their real personality. Maybe we should instead blame the evident poor casting, which was conducted to choose these two presenters.

Perhaps they should have stressed a bit more on intellectual standards, rather than what ever it is they chose them for. Maybe they are just trying to provoke people so they would send more SMSs to complain, indirectly increasing the TV’s income? That’s just a thought… trying to make sense out of what was being presented to us, the viewers…

We also cannot even tell whether we are faced with two men or two women! Not that there is anything wrong with that. Just a weird observation, especially since we all know how much Nidale El Ahmadiyeh cannot stand homosexuals.

That’s at least what she keeps saying repeatedly in most of her interviews, for whatever strange reason that is.

All the viewers were sending complaints to the programm, and that only made mademoiselle Maguy even more full of herself, saying this is the way she is and we can change the channel if we don’t like her, or complain to the television’s administration.

Could it be Intellectual provocation to stimulate our minds and make better citizens out of us?

Well if this is what is intended by Al Jaras Television (and surely it isn’t ), it will definitely not be achieved this way.

What a disappointment, really!


Help us improve this page:   Correct or update the Raja and Maguy Shou El System on Jaras TV page

This Article was prepared by Nidal.Mourtada
All copyrights are reserved to the Author of the Article