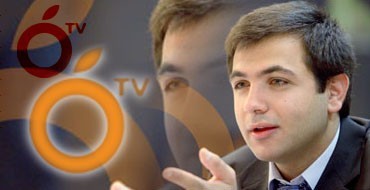 The Orange Tsunami is finally on Air

The Orange Tsunami is finally on air, and the existing TV channels are not that thrilled!

OTV’s tentative broadcast was recently launched on July the 20th, proposing a News bulletin, followed by a special interview with General Michel Aoun.

The anticipated arrival of OTV had made quite a few televisions fear for their market shares. Many were actively preparing for new programs and shows, to dip into when the time comes to fight back. A few also temporarily limited their budgets and unnecessary spending, in order to watch closely and monitor OTV’s performance, so as to evaluate the most appropriate reactions.

The current distribution of all our Lebanese televisions can be caricatured as follows:

• Future Television speaks in the name of the “Moustakbal” party and of the Hariri family. The TV where the grass is always green, even when the country is on fire!

• Lebanese Broadcasting Corporation - LBC speaks for the “Ouwet” party and their leader Samir Geagea, and also communicates, to some extent, the American foreign policies in the region.

(Previously unnoticeable, these last couple of years it has become excessively obvious).

• New Television - New TV, or “the alternative” television loathed by all the corrupt. Although by far one of the most objective and balanced TV stations, it is sometimes wrongfully tagged by some as pro-Syrian. It is also known to promote the alternative or natural medicine and broadcasts macrobiotics and New Age inspired programs.

• TL. Well no one really watches it anyway lol.

• Finally Télélumiere. A Religious television, which does not deal with politics altogether.

• We were tempted to add Al Jaras Television, but we are not sure it really qualifies as a decent TV channel to begin with. It has a very poor amateur-like production; the picture quality is sometimes so weak and pebbled that we are persuaded the whole TV station might just be built in Nidal Ahmadiyeh’s Bedroom! The cameraman is also Nidal, probably equipped with her ultra sophisticated 2micropixel hand cam. She also seems to be the lights technician, the editor, the set manager, the make upartist …and… o well you got the point.

Did we cover everyone?? This is of course a broad overall image. If we looked closer, surely we would find a few variants, such as, just to give an example, Saiid Ghorayeb on nbn with his talk show Mokhtassar Moufiid. He is definitely one of the most objective journalists on all Arab and non Arab televisions combined! This is just to say that each channel has its small exceptions here and there nonetheless.

The TV channel which feared the most this arrival of OTV was undoubtedly LBC. Until now it has taken advantage of its pastreputation and the emotional bond it had created long ago with most Lebanese citizens and Lebanese expatriates during the civil war, especially the Lebanese Christians. It is seen all throughout the Arab world as a source of modernity with westernized shows dedicated to open minded viewers (or curious close minded ones as well). However, with LBC’s dramatic change in orientation, especially on the political level, this bond has gradually weakened and this “exclusivity” was tarnished so as not to say was lost for good.
What will be the repercussions from a tough competitor such as OTV? How would LBC cope with this blow? Will this be the end of LBC as we know it?

Similarly, New TV also fears for its position. The large majority of LBC’s Lebanese viewers, especially the partisans of Aoun and “Tayar Al Watany Al Hour”, shifted towards New TV in the recent years. New TV is also known for its objectivity and creates an appropriate outlet for all those Lebanese who do not relate to any of the other “specialized” televisions, and just want a neutral objective look at things.

OTV is currently presenting itself to the public as a just, impartial, and unbiased source of information.Now, all that is left for OTV to do is to gratify our expectations with really good and balanced programs, and truly become the next number one Lebanese TV channel, uniting all Lebanese no matter what their political affiliations are. It is also strongly expected to balance out all the propaganda and brainwash a few other media sources are influencing on the Lebanese public. Otherwise it will just be an addition to the classical stereotypical list presented above, and just be a waste of air space. So far, we like what we are seeing and hearing, but we will just have to wait and see OTV’s evolution… In all cases, Mabrouk OTV we wish you all the best.

Orange Television - OTV started broadcasting on Arabsat, Badr 3, 11823 MHZ. Also locally, OTV will have land antennas that will cover 70% of the Lebanese territories, especially the area of Beirut and its surroundings.

Orange Television - OTV operates from a 4-storey building in Dekwane.

OTV has 60 employees, in the future, the number of employees is expected to grow into approximately 120, in addition to around 30 freelancers.


What do you think of OTV?
Did you buy your orange shares yet? How do you view the birth of this new
Lebanese TV channel?

Help us improve this page:   Correct or update the The Orange Tsunami is finally on Air page