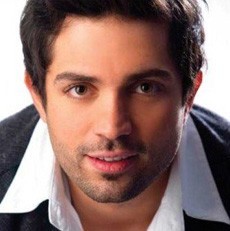 The following in an exclusive interview with Mohamed Bash, dubbed the Prince of Romance. We asked him about his experience in Star Academy, his latest news, his upcoming projects, and much much more..so read along. Enjoy.

Hello Bash and thank you for doing this interview.

Thank you for having me with you.

Do you follow horoscopes? If we are not mistaken you are a Scorpio, and it seems you will have a positive year and enjoy a certain stardom. (See Horoscopes 2011) Do you promise your fans an exciting year;)?

I do not believe in horoscope, but it's fun to read it especially when it's good news:)

We know that you are currently working on your debut album. Can we know how it’s progressing?

It 's going well, hamdoolealah:) It should be ready somewhere around June or July. I have finished 5 songs already and I am still working ..In the album, I will be singing in Lebanese accent and Egyptian accent on some songs ,also I am cooperating with studios in Jordan, Lebanon and Syria so the music styles will be very diverse.

You write and compose on the guitar your own songs. Will you continue doing that, or will you seek the help of other artists (composers, lyricists, etc.) that could maybe give another angle to your work? Similarly, could we also see you one day composing for other famous singers?

I think it's more personal when I write my own songs,I 'feel' them more. But I am also seeking other lyricists, because yes it does give a different angle... with stories different from mine for example. Yes sure, I could create songs for other artists,it would be my pleasure because it complements my creative work.

It seems your romantic style has pleased your fans so far (Rah Ensaki, etc.). Will you stick to that, or could we see you in more upbeat dance tracks?

That should be an interesting change:) We are curious, ever thought of acting? Syria is one of the leading producers of Arabic TV series at the moment, so...

I had an offer from Egypt to be in a film but me and my management team came to the decision that it was way too early for this step. First I have to establish myself as a singer, and after that I could move to acting.

Let's talk a bit about Star Academy. Is the final show we see on TV reflective of what really goes on on the set? Because many suggest the editing changes and alters the real picture to the benefit of a more interesting outcome in the eyes of the producers and directors…

I used to think everything is set up, but when I was inside I found out that everything is as real as it gets. The 'montage' crew obviously chooses the most interesting moments of the day, because nobody wants to watch something boring. But I assure you it is real.

Aha, if you say so we believe you then ;) Incidentally, are you still friends with any of the students that were with you on the show? Do you still hang out, call each other up etc...

Yes I am still friends with every one ;we speak on the phone,and when we travel to our respective countries we see each other(if they come to Syria they visit me,or if I visit Egypt or Lebanon I hang out with them). We shared an unbelievable experience which will always put a smile on our faces and make us love one another.

One previous student that caught our attention is Lara Scandar. What did you think of her first single (Mission Is You)? (see also: Lara Skandar Mission Is You Interview with Fanoos.com)

I found Lara to be very professional and her team is top notch, so it's no wonder the single is great and I loved the RnB remix of the song. She is a real fighter and she gets only the best.

In an interview once, she called up and there was some sort of improvised duet whereby she sang part of your song in English or something of the sort. Could we see you in an official English-Arabic duo for example?

For sure this idea is great,but we have to find a special moment to make this happen.

Not sure if you were aware of it, but we did a big poll a few months ago and it became obvious people find you very attractive. You were actually named Sexiest Arab Man out of many other prominent Arabian men that were nominated for the title! Did you know you had such an effect !?

Of course I did:) Everybody has a different idea of what sexy or beauty is. I'm very flattered for being named as the sexiest Arab man,it's a great honor.

Where will we be seeing you next... any upcoming music video-clips, TV interviews, concerts, etc? (For all the fans of Bash make sure to Watch Mohammad Bash Songs during and after the Academy)

I'm working on a single and video clip so I'm not giving interviews currently. I'm waiting until I launch them before I start my campaign with news agencies...but I still do private parties all over the Arab world.

Thank you again for this quick interview Bash. Would you like to add anything else before we end our little chat?

I want to say thank you for all of my fans around the world, you know that I appreciate your support and I will do my best to share my art with you more in this up coming year. Take care...
Help us improve this page:   Correct or update the Mohamad Bash Latest News in this 2011 Exclusive Interview page