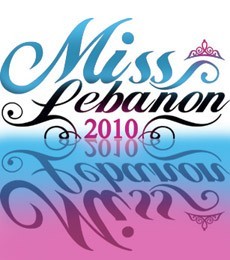 For rumors that preceded the pageant refer to Miss Lebanon Cheating Scandal.

The crown was handed over by Rahaf Abdallah last year's queen.

The guest singer was Ragheb Alameh.

Ragheb Alameh and Haifa Wehbe will be the guest stars of this event of Miss Lebanon 2010/2011 and shall perform during the contest.

This glittering ceremony was presented on LBC by Tarek Munir, under the guidance of the Lebanese Ministry of Tourism.

16 beautiful women from Lebanon were selected to compete for the title. The winner will carry the throne of beauty and represent Lebanon in major international beauty events. It is good to note that Rima Fakih, of Lebanese origin, was crowned as Miss USA 2010.

Jessica Kahawaty, one of the contestants for the year, was said to have the best chance in winning as she had already won previous titles such as Miss Lebanon Australia 2007 and was even nominated for the Most Sexy Arab Women 2010 contest.

Actually, the Organizers of the Miss Lebanon Pageant were shunned not long before that, after Miss USA Rima Fakih announced she had been previously denied the chance to compete in her native country for Miss Lebanon. The reason given: Rima is an expatriate and does not reside in Lebanon. She ended up representing Michigan and winning the American title! Could it be that the Miss Lebanon organizers have learnt their lesson, since Jessica Kahawaty is also an expatriate from Australia? It seems other candidates could also be expats...

The Sixteen Lebanese girls underwent tests and questions by a Jury Members of Miss Lebanon. This helped pick the finalists, and determine the top winners for the year.

A lot of secrecy surrounded the names of the candidates of Miss Lebanon Pageant.

Read more about the Winners of Miss Lebanon 2010-2011 including the runners up and the top 10 candidates.

Help us improve this page:   Correct or update the Miss Lebanon 2011 page