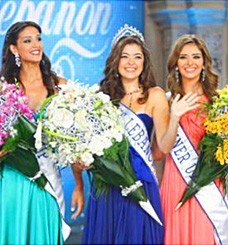 IMPORTANT NOTICE
If you are looking for the Miss Lebanon Contest which took place during July 2010, please refer to this new article which is tagged as Miss Lebanon 2011.

It is a bit confusing to understand how the Miss Lebanon Beauty contest works.

It would be much better if the contest takes part early in the year, January or February by maximum.

Due to the date being in the mid of the year, Miss Lebanon Martine Andraos will probably be considered as the winner for 2010 rather than 2009.

The first runner up was Marie-Ange Sebaaly and the second runner was Celine Hassoun.

Miss Lebanon contest was presented by Malek Maktabi, the guests were Nancy Ajram and Wael Kfoury who both performed two songs during the event.

Help us improve this page:   Correct or update the Miss Lebanon 2010 page