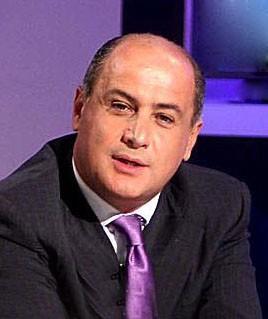 Marcel Ghanem is noted for his pretentious character, and his annoying laughter. He is often criticized for the product placements on his show, especially the watches. He has a habit of striking weird poses to show-off the watches he is advocating.

Marcel Ghanem often focuses on heated debates to retain the attention of the viewers until the end.

About his beginnings, Marcel says: "I never thought that I would present one day a television broadcast and this was far from being the dream of my life.".

After obtaining his degree in law, he made studies in biology while he gave some tutoring lessons in the morning.

During that time, his brother, George Ghanem who worked at Radio Liban Libre RLL, moved to LBC and so Marcel replaced his brother at the radio station.

In 1991, someone proposed to Marcel Ghanem to present a political emission on the LBC and Radio Liban Libre. This program entitled Kalam Massoul.

Marcel Ghanem presented Kalam Massoul TV Program with May Chediac and it lasted for two years.

His show appears every Thursday and is watched by Lebanese all over the world.

Due to the critical conditions which Lebanon was facing during the year 2005/2006 and as a result of the new threats on his life, Marcel Ghanem broadcasted his shows from Paris.

Help us improve this page:   Correct or update the Marcel Ghanem page