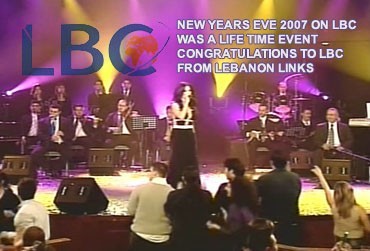 The Lebanese and LBC said it out Loud, We want to live, we love to party.

New years celebrations in Lebanon were by far a cry out loud by the Lebanese to stop the current situation and move with Lebanon forward towards a better country.

The people who attended the Biel celebration on new years eve, showed to the world how the Lebanese strive for happiness.

On the other hand, the Lebanese Broadcasting Corporation - LBC has set up a life time event and a live show which went on for several hours. The LBC hosted many singers to sing and dance on stage and make the Lebanese and the viewers around the globe happy.

Joe Ashkar, Madlene Matar, Roula Saad, Melissa were among many other singers who celebrated new year.

Tony Khalifeh hosted the event, entertained and gave prizes to many people live on air.

Tony Khalifeh also interviewed Michel Hayek, it was moments of silence when the Lebanese around the globe held their breaths as the Michel-Hayek 2007 Predictions were being announced.

Help us improve this page:   Correct or update the The Lebanese and LBC New years eve show page