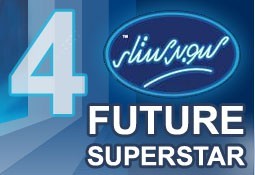 Future SuperStar season four will be telecasted on the 14th of January.

The contestants come from 12 different countries after a lot of tests made in several countries including the states and Canada.

The presenter will be Ayman Qayssouni who will present and support more than 20 episodes until the winner of the title is announced.

Since April 10 2006, the following audition cities were revealed:
The auditions however have been indefinitely postponed due to the Israeli attacks on Lebanon.

Help us improve this page:   Correct or update the Future SuperStar 4 launching page