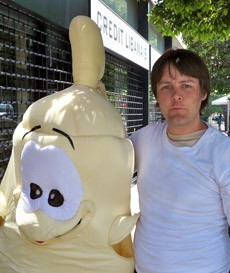 We already informed you that PETA - People for the Ethical Treatment of Animals was in Beirut. If you happened to be on Hamra street on the 21st of
July 2010 around noon, you might have noticed a Giant Condom walking around promoting animal birth control to reduce animal homelessness. Here are some Interesting facts which PETA wants you to know before you Adopt Homeless Pets.

Dressed as a giant condom and holding a heart-shaped sign that read, "Dogs and Cats Can't Use Condoms. Spay and Neuter", a member of People for the Ethical Treatment of Animals (PETA) Asia aimed to help Beirut residents brush up on their ABC of animal birth control.

Other future campaigns will include sheep import from Australia, vegetarianism, and a KFC campaign…

Just for fun, we thought we would get you an exclusive interview with Condom-Man, during PETA’s visit to Beirut.

I am Jason Baker from the U.S. I’m the director of PETA Asia.

Are you the only Condom-Man, or are there others?

There is another pink one, but lately it’s been mostly me. I once also wore a transparent condom costume. We have previously done this in India, and also in Hong Kong, where we are currently based.

So what does it feel like being a large you know what? You must be quite popular with the gals!

Actually it is very hot and sweaty in here! I have to walk around for at least one hour like this.

Have you always been an activist for animal rights?

This was always what I wanted to do, but I first studied Economics, then Political Science. I joined PETA about 16 years ago.

So Condom-Man, are you friends with any other superheroes we know of?

I have also actually done Baby-Cupid! It was in a village called Intercourse in Pennsylvania, an Amish neighborhood, to put pressure on Kimberly Clark’s, a company that tested its products on animals… and we were successful!

That’s a funny name for a village! So where will you go next?

We have a campaign in Amman Jordan, and after that most probably
Damascus in Syria.
Help us improve this page:   Correct or update the Condom Man page