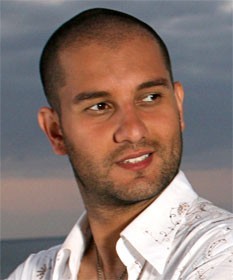 Bashar Al Kaissi , also spelled Bashar Qaissi or Bachar Kaysi, he is an Iraqi singer that was born in Kuwait on the 18th of july 1980.

Around 1986 and the years after was the first appearance of Bashar in front of the camera where his father (Farouk Al Kaissi) was the director of the famous children program‚ Iftah Ya Sumsom (open sesame) which was the Arabic version of the program sesame street.

Bashar bought his first guitar in 1998 and he started learning this instrument that he loved and he became a professional guitar player in Iraq that he was selected with two other friends to go to play their music in France and Switzerland.

Bashar applied to star academy in 2005 in France were he was transfered to Star Academy Lebanon and he was accepted there and had his good Success and started his career in singing, TV hosting and acting.

An Extensive biography about Bashar Al-Kaissi

1980
On the 18th of July was the date of Bashar s birth in Kuwait originally from an Iraqi father and mother.

1985 - 1991
Bashar Started his school in Kuwait starting from kinder garden till junior 3 in gulf English school that gave him a very strong base in English.

1985
Around this year and the years after was the first appearance of Bashar in front of the camera where his father (Farouk Al Kaissi) was the director of the famous children program “open sesame” which was the Arabic version of the program “sesame street.”

1991
After the gulf war Bashar moved to Iraq (his original country) where he lived in Baghdad precisely in a neighborhood called Cairo quarter (hay al Qahira).

1998
On the 23rd on October Bashar bought his first guitar and he started learning on this instrument that he loved since that date.

1998 - 1999
Also getting very high grades Bashar applied to Nahrain university (Saddam university before) and he studied one year of computer engineering.

1999 - 2002
Bashar moved to Baghdad university and studied there three years of computer programming and here his popular personality started appearing after being elected the leader of his class and also being elected in the student community that represents all the students of the whole university.

2002
On the 22nd of June was the (Fete de la Musique), The music day in France, he played a flamenco concert with two of his friends at the CCF (French culture center) in Iraq, where they impressed everyone which because of it they got a visa to France and Switzerland to play concerts there.

On the 11th of July Bashar left Iraq to France according to the plan of making concerts and then coming back to Iraq where the plan changed and he got a scholarship to finish his studies in France.

2002 - 2003
Bashar moved from one city to another in France playing his program with his friends played in Montpelier, Bezier, ales and took a flamenco course with the Spanish guitarist Pedro Ibanez.

2003
Bashar started studying French in the Sorbonne (la Sorbonne) and it took him one year to learn French to be qualified to continue his studies in computer in France.

2005
It was the casting of Star Academy France where everyone encouraged him to apply and enter, so he did, and he reached the final stage of casting where they suggested transferring him to Star Academy - Lebanon, which happened, and he was accepted. After being nominated the second time, he left after 6 weeks and he was invited again to the program as a guest but a guest who stayed for 2 weeks after a huge request from all viewers in the Middle East.

2006
Bashar released his first single “Sghayroun” which was a big success for him.

Bashar acted the main role in a series called “Melishya Al Hub” (the love gangster) which was directed by his father Farouk Al Kaissi and was broadcasted on Al Sharqiya TV almost every year once.

2007
1st January Bashar Started hosting his first program that was also on Al Sharqiya TV, it was a talk show program discussing every episode a different subject which lasted for 4 months.

In May of this year, Bashar moved to Rotana Khalijiya and hosted another program there which was a top 40 program depending on peoples votes by mobile which also lasted for four months and here he got the title of best presenter on Rotana Khalijiya.

In Ramadan, Bashar moved to Beirut where he presented his third program which was a humanity program called “Labayk ya Iraq” (live for you Iraq) which was a program where people help each other in it where he raised charity, furnished houses, got children into school, found jobs, etc.

2008
Bashar shot his second video “Ya Dinyiti O Afrahi” which will be broadcasted soon.

Help us improve this page:   Correct or update the Bashar Al Kaissi page