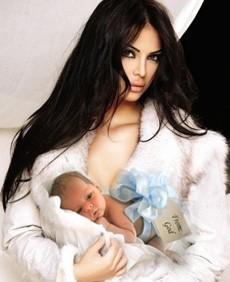 What's the truth behind the issue of Amar singer's baby boy son?

It seems to have become a bad habit in the Arab World that whenever someone falls down, people around rush to kick them further down instead of helping them up!

It was never a secret that Amar was originally created as the beautiful alternative to Hayfa Wehbeh (for a while nicknamed Amar Rotana, coincidence?). Big music companies usually use such strategies to either gain larger market shares or to subdue famous pop stars that refuse to comply with their greedy demands. But lately, her story has taken a lot of space in the People media and gossip magazines that we find it hard to neglect this issue any further.

First, Al Jaras TV eagerly gives Amar's mother ample time to freely curse and villainize her own daughter, for the benefit of the TV station of course(desperately looking for more attention and viewers?). Amar is said to have given birth to a baby boy out of wedlock (ooo-hooo what a big deal), from the rich businessman and producer Gamal Ashraf Marwan owner of Melody Hits TV (ok this is slightly more interesting now lol). A common trend in the west has finally reached the Middle East; it is well known that some people will do anything to cash on the notoriety of a relative. Madonna's brother did that...even Eminem's mother sold her stories about her own son to the highest bidder! The list is very long, but this is what comes to mind at this moment. What a terrible feeling it is to be betrayed by one's own blood, just for a few meager dimes...

But lately, the charade has taken a more grotesque turn...It is now time for Mister Zaven Kouyoumdjian to finally expose to us his latent Tony Khalifeh complex! It seems that although Amar had refused to appear on his show, Zaven was determined to force her hand, and invited for that a few magazine writers and editors to make it a success. The pretentious guests first claimed they did not know who Amar was!? Yes, apparently they forgot all those articles they wrote about her, and all those photos they featured, not to mention those magazine covers dedicated entirely to her in previous issues (most probably paid for also). They finally could not avert any longer from the real reason they were invited on the show in the first place, and went on discussing the personal life of Amar on TV. One caller by the name of 'Lama' (was it the singer Lama Hatem?) interrupted their little conference and explained how she was made to pay for every time magazines spoke about her or covered her news...then her call got terminated before she could continue. One of the magazines in question had a spokesperson present on the show and was directly pointed out lol... how embarrassing is that?! It wasn't long before Amar, watching from home most probably, could not take it any longer and had to call the show and hysterically ask the guests to stop bashing her on TV and to leave her alone... Well Zaven got what he wanted, but still wanted more and tried to extort a live promise from Amar that she would be a guest on his show next week...

We are not sure how all this will end... Regardless of how we value Amar's work, we really hope she stays strong, and does not give them the satisfaction!

So what do you make of all this?

Amar’s story surged up in the media again when the alleged father Jamal Ashraf Marwan interfered to stop the airing of an episode she had taped with Mona Abou Hamzeh on Talk of the Town (Hadith el Balad). Amar was expected to clarify her issue but got edited out of the show. Mona later explained on Lel Nasher with Tony Khalife that she was threatened not to go there. We quote, ‘You are not big enough to stand up against us, you are a married woman you don’t need any trouble...’ Amar also assured Tony the boy is Marwan’s son and challenged the father to undergo a DNA test. She added that she could not prove her marriage was legal because the official papers were stolen from her by Marwan. She also added that he was informed of her pregnancy but delayed his final decision for abortion which was a possibility. But after the 5fth month, Amar could no longer accept that solution and insisted on keeping her baby. During that time she respected Jamal Ashraf Marwan’s choice to keep their marriage a secret, noting she was still paying him for all her video clips and other services provided by his company Melody as if a regular client.