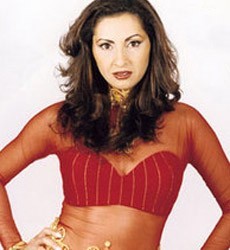 Samara is a famous Lebanese Belly Dancer from Iraqi descent. Samara's real name is Tahira (pure in Arabic); her artistic name was given to her by TV personality Gaby Lteif.

Samara started her professional Raqs Sharqi Oriental bellydance career in 1982 by accident. She got the support of the written press, but more importantly was adopted by Simon Asmar, the creator of stars (at the time at least). He propelled her forward with numerous TV performances on the shows he would be directing. Although she was far from being the best in this art form, she was the most popular because of this media coverage, and had a golden period between the mid 90s early 2000s. She was mostly admired for her demure performances, as opposed to what was happening on the scene at that time (vulgarity in belly dance performance) . Samar also managed to shoot a few music video clips featuring some of her belly dance tableaux.

In 1986, she became a mother and had to shortly stop dancing or making appearances. Because of problems with her spouse Tarek Osman which ended up in a divorce, her career was also put on hold and she disappeared for a long while before making a weak come-back in 2008.

Samara was however busy giving private dance classes and opening belly dance institutes in all countries of the Gulf, and in 1997 she opened her first Academy in Brazil.


Samara is against Male Belly Dancers, and feels this type of dance should be reserved for women only.

Help us improve this page:   Correct or update the Samara Belly Dancer page